Why The New Chevrolet SS Is Really a 4-Door Camaro 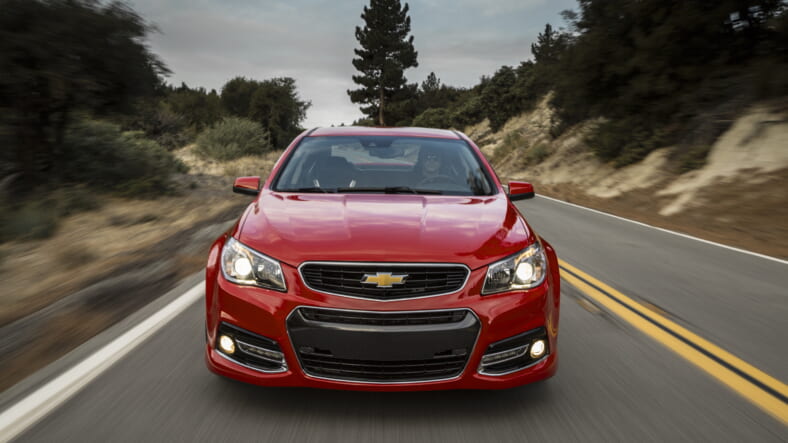 Camaro drivers: relax, we’ve got the solution to your troubles right here. Remember how you thought having a back seat in your Chevy pony car future-proofed you against the arrival of a kid?

How’d that work out for you? Turns out wrestling an infant seat into and out of the Camaro’s cramped back seat is just not a practical proposition, is it? No worries, Chevy has built you a four-door Camaro.

OK, not really. Thankfully, the Camaro is a two-door-only model. But the Chevrolet SS is a four-door sedan built on the same chassis as the 2010-’15 Camaro, and this humble-looking hot rod enjoys the same handling prowess as its sportier sibling.

The SS weighs barely more than the Camaro, so the only difference might be noticed in a slalom, when the SS’s bigger booty can make its presence apparent.

The SS, which takes its name from the Super Sport nomenclature Chevy used to apply to classic Camaros, Chevelles and Impalas, debuted last year. But the 2015 edition only offered a boring automatic transmission. Camaro-driving car guys want to take direct control of their ride’s gear changes, and the 2016 SS lets us do just that.

The manual shifter enjoys light shift action and the SS’s clutch pedal is both smooth and communicative, providing good feel for the clutch’s friction point. The result is that even if your clutch skills have gotten shamefully rusty as the result of piloting an automatically shifted car, the SS is an ideal recovery vehicle.

The transmission is aided in that mission by the 415-horsepower 6.2-liter small block V8 engine, whose 415 lb.-ft. of torque and seductively burbling exhaust note make it easy to match the engine’s revs with vehicle speed.

Of course, the SS sends its power to the rear wheels, as John Z. De Lorean, father of the muscle car, intended.

Unfortunately, Chevy felt obligated to hide the gorgeous aluminum V8 with an ugly black plastic engine cover, but popping that off and polishing the alloy shouldn’t be a problem for any car nut.

Our test car listed for $48,570, and as you’d expect for a car brushing up against $50K, it is nicely appointed inside, with leather wrapping on the steering wheel, shifter and its heated and cooled seats.

There’s a head-up display projecting the speedometer on the windshield so your speed is always on view, which helps when struggling to resist the temptations of the car’s seductive engine sound egging you on faster.

The underpinnings included computer-controlled magnetic ride shocks of the sort that Ferrari bolts to the 488 GTB, plus 19-inch aluminum wheels and big-ass Brembo brakes.

The SS has not been a smash sales success so far, and manual transmissions aren’t exactly the box office gold to spark a massive rush to Chevy dealers. But the SS is a truly heroic machine. It gives dads a practical everyday machine that is a legitimate family car that passes any reasonable back seat utility test.

But at the same time, the SS is an authentic muscle car. And if anything remotely approaching the SS’s combination of speed, comfort, handling and charisma had emerged from from the factories of fashionable German brands, it would be legendary as an incredible sport sedan. Here’s hoping the SS gets proper credit for these astounding accomplishments.