A faster, safer racer that could put F1 and IndyCar back on track. 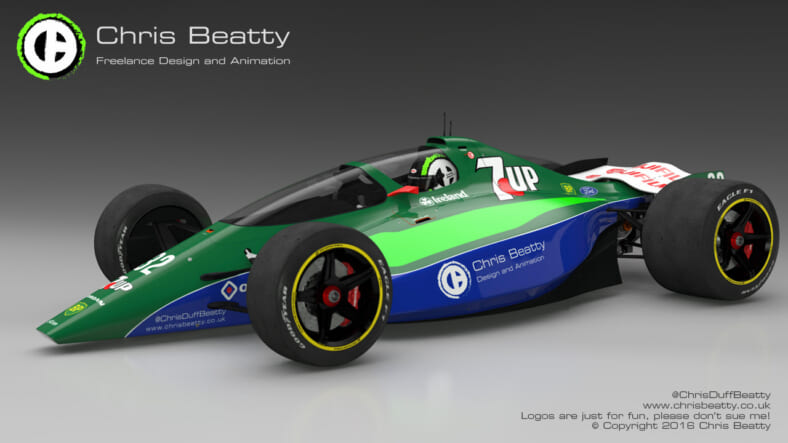 The more top-level open-wheel racing series like Formula 1 and IndyCar modify their cars to be safer, more relevant and better for wheel-to-wheel competition, the uglier, less interesting and less race-able they seem to get.

Chris Beatty, like many others, is unhappy with the current state of affairs, so he took matters into his own capable hands and designed a futuristic open-wheel racer that would be suitable for F1 or Indy. His design incorporates the cockpit canopy increasingly sought by many drivers for improved protection from the kinds of head impacts that killed Indy driver Justin Wilson and F1 pilot Jules Bianchi last year.

At the same time, Beatty’s Velocity racer makes other changes meant to improve drivers’ ability to race and pass one another. The most critical, and visible step, is the elimination of the front wings and reduction of the rear wing to a small vestigial device designed to help trim the car’s balance.

Wings are very sensitive to the aerodynamic disturbance left in the wake of a leading race car, making it impossible for a pursuing car to get close enough to pass, so the Velocity relies instead on underbody ground effects for aerodynamic downforce to aid grip.

The car also uses fat tires to provide plenty of traction that isn’t dependent on aerodynamic aid, making it easier for racers to find a way to drive around their opponents.

Beatty also envisions the use of cast iron brake rotors, as is currently the case with IndyCar, to provide extended braking zones approaching corners, again to give the drivers a better chance to engineer a pass than is possible in the extremely compressed braking distance of race cars with carbon ceramic brakes.

Wherever the car races, Indy or F1, Beatty would like to see it powered by a turbocharged V8 engine producing about 1,000 horsepower to provide spectators the exciting performance and sound they expect from top-level racecars rather than the dull-drone of the fuel-sipping rev-limited hybrid-electric turbo V6s racing in F1 currently.

One challenge for cockpit canopy proponents is driver egress after a rollover, but Beatty’s design accounts for that matter with a fully removable canopy.

Hopefully the current rules that have drained drama from Formula One will prove as easily removable.