A work of art on two wheels. 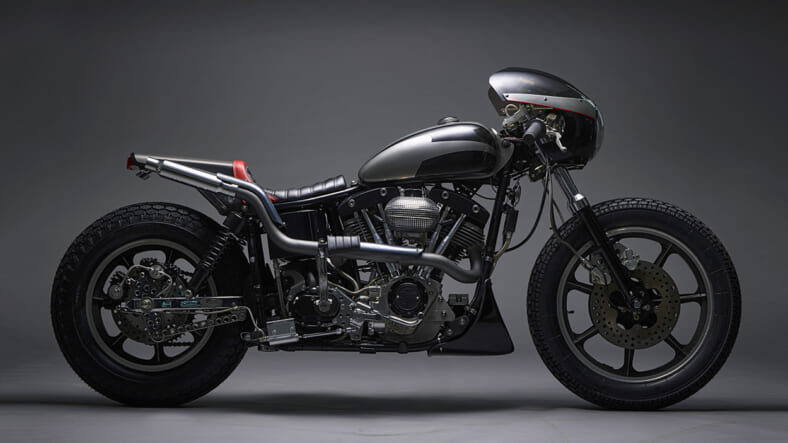 James Roper-Caldbeck of Denmark’s Jamesville Motorcycles dismisses most custom Harley-Davidsons as a bunch of “metalflake baggers”. Known for his clean, stripped-back bobbers, he recently built his first Harley café racer, based on an early-80s FX Super-Glide with the famed “shovelhead” V-twin engine, that bucks the trend bigtime.

“I’ve always loved the late ’70s XLCR 1000 too, and that became my inspiration,” he says of the project. “I found a stock-ish FX, but it had an 80ci S&S motor and a five-speed transmission—very nice… To be honest, I had no idea what I was doing,” James admits. “But I knew I wanted it black, with a fairing, and to look fucking mean!”

He started by fabricating a new seat pan and cowl from scratch, which houses a high Triumph taillight inspired by superbikes. The original FX tank got a few modifications that render it unrecognizable and very cool. Ditto the fairing, a random eBay find.

The exhaust system is inspired by Italian sportbikes. “I love Ducati exhausts that wind though the bike and then shoot out the tail. I know it looks like you would burn your ass on it, but you don’t—and it sounds awesome.” The S&S ‘V80’ engine has a Super Stock ignition system, and pumps out around 40% more horsepower than the average Shovelhead motor.

“It’s got power—so it needs good brakes. The originals, to put it bluntly, are terrible.” The shovel now sports dual discs at the front, with Performance Machine calipers both front and back. The controls are basically original with some modifications, but the pegs are custom fabricated.

Add the blacked-out paintjob and boom. “It’s subtle yet sporty, and just right,” James says. Fucking mean, but not too mean….