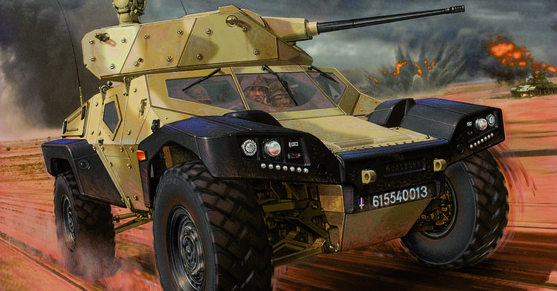 Future troops will be able to navigate the battlefield in a vehicle with protected survival cell, a gun turret on top for offensive capability, and the ability to creep sideways around obstacles.

French military truck builder Panhard (a one-time carmaker that has since specialized into a niche) proposes the CRAB (Combat Reconnaissance Armored Buggy), a machine to carry three soldiers while protecting them from machine gun fire, mines and improvised explosive devices.

The company predicts its top speed will be 68 mph and that it will have a driving range of 500 miles. No specific engine has been chosen yet, though Panhard describes the CRAB’s powerplant as “very powerful.”

It has an integrated electric motor that will permit some all-electric driving for stealthy silent motoring when needed. It even has a high-speed reverse gear and 360-degree cameras for maximum get-us-out-of-here potential.

The CRAB is all-wheel drive and has four-wheel steering that reduces its turning radius to 33 feet. While that’s not impressive for a car, it is for an armored vehicle that weighs 16,000 to 20,000 pounds.

No word yet on which nation’s army might unleash the CRAB, but we want to be first in line for a test drive.