This Stunning Concept Imagines What a Porsche Motorcycle Would Look Like

Incredible, it turns out. 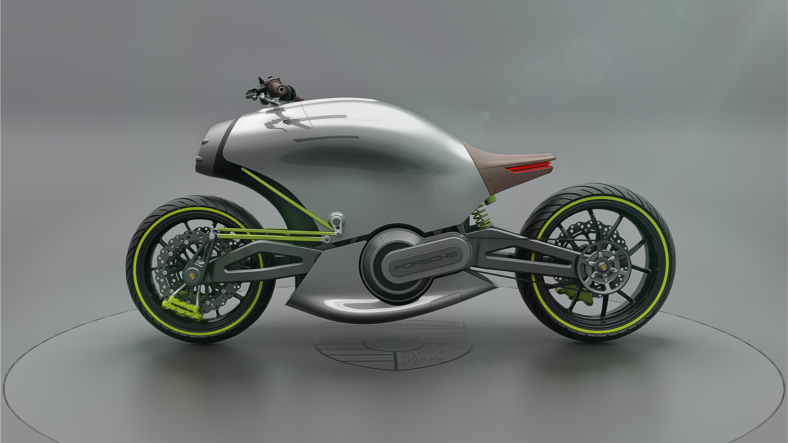 Spanish designer Miguel Angel Bahri got to thinking about how BMW has two-wheeled models that let customers buy into the brand with a different kind of machine at a different price, and he decided that Porsche needs to get in on the motorcycle action. So while this concept design isn’t actually from Porsche, it is Bahri’s notion of how the brand could diversify into two wheels.

Because this is a concept bike looking to the future, and considering Porsche’s recent forays into electric power with the 918 Spyder and its Le Mans-winning 919 race car, Bahri chose electric power for his concept.

It is called the 618 because it would be the entry-level two-wheel vehicle for the brand, sitting just below the 718 range, he explained on the design site Behance. “I wanted to represent the spirit and character of Porsche’s DNA in this futuristic-looking pure electric and exclusive power cruiser.”

Bahri explains that he thought it was crucial for the 618 concept to retain Porsche’s signature “form follows function” design philosophy. In this instance, it means the concept bike uses a swingarm front suspension with center hub steering in place of the typical telescopic forks to help keep the bike’s center of gravity low for easier handling.

The electric motor is rated at 160 horsepower, and with its hefty 20 kilowatt-hour battery pack, the 618 weighs 485 lbs. Both numbers put the concept solidly in line with current premium European power cruiser models like the Ducati Diavel, which is rated at 162 hp and claims a 463-lb. dry weight.

As an electric model, the 618 would not participate in the usual motorcycle numbers juggling, in which there are various weights reported, with and without fuel, coolant and oil.

We don’t know Porsche’s reaction to the proposed concept, but Bahri’s not slowing down. “Updates will be adding soon, as I’m working on the ‘S’ and ‘RS’ Versions,” he reports.