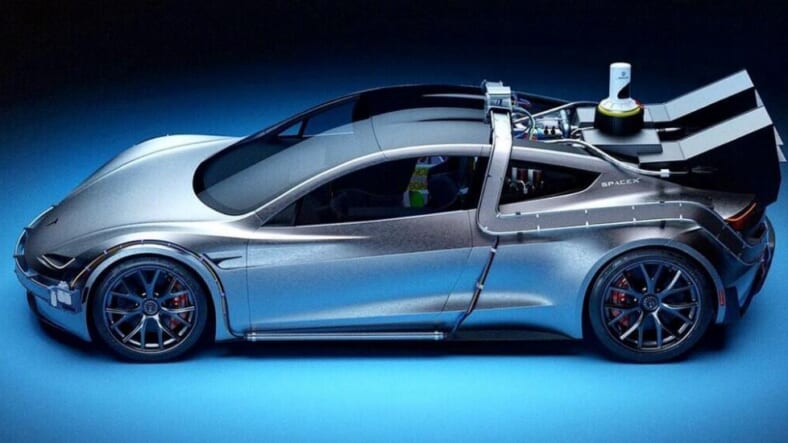 Doc Brown’s time-traveling DeLorean from Back to the Future may not need roads to run on, but this bonkers Tesla-DMC-12 mashup definitely does.

It comes from the ingenious mind of San Francisco-based automotive designer Charlie Nghiem, who is presumably a fan of both the classic 1985 movie and Elon Musk’s electric car company.

The front’s streamlined hood, wheel arches, and seamless transition from the windshield to the roof are lifted directly from the forthcoming Tesla Roadster, which promises to be the quickest production car in the world with a blistering 1.9-second zero-to-60 mph time whenever it finally arrives. So yeah, hitting 88 mph shouldn’t be an issue.

Things really get wild in the concept’s rear. Hi Consumption notes that the EV boasts two monstrous afterburners and the “Mr. Fusion Home Energy Reactor” that Christopher Lloyd’s nutty scientist uses to convert a beer can and a banana peel to fuel at the end of the BTTF.

Nghiem also included a nod to the sequel by picturing his creation with the hoverboard Michael J. Fox’s Marty McFly rides in Back to the Future Part II.

Astute viewers will notice that the car also features a logo from SpaceX, Musk’s aerospace company. That has some basis in reality, as the billionaire tech magnate has tweeted about a “SpaceX package” for the Tesla Roadster, which will supposedly include “10 small rocket thrusters” to “dramatically improve acceleration, top speed, braking and cornering,” according to Teslarati.

Musk even responded to these renderings, tweeting that the actual SpaceX package’s thrusters will be “subtle” and “hidden behind [the] license plate.”

SpaceX thruster package will be subtle. Hidden behind license plate.

Apparently Nghiem’s design is a little too wild—even for Musk.