Why Dodge Charger Police Cars Are Becoming All The Rage

These hopped-up cop cruisers come with some All-American muscle under the hood. 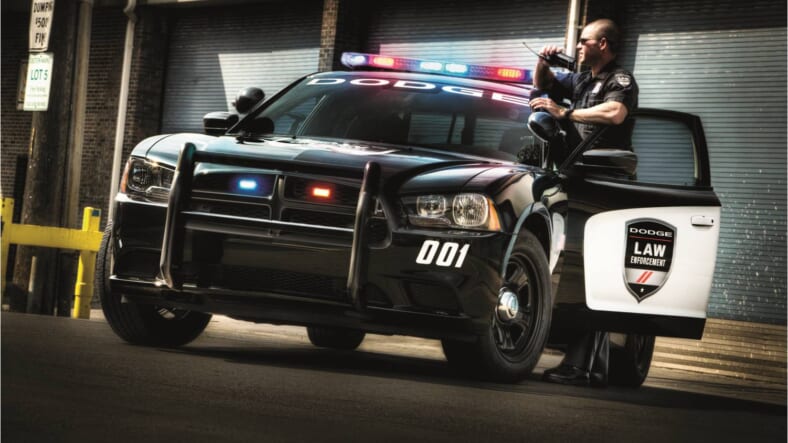 Skidding, spinning and speeding through police pursuit exercises is so much fun that Dodge is putting on a summer camp for cops to practice chasing down bad guys in black and white Chargers, just like Police Academy star Steve Guttenberg.

This week Dodge will be showing off the Charger Pursuit to police at Sonoma County and Alameda County, California in the “Charger Pursuit Experience.” The class lets cops find out what it means to say that their cruiser has a 370-horsepower Hemi under the hood.

Dodge aims to recruit officers to the Charger’s camp when departments are choosing which cruisers to buy for patrol duties.

Not long ago, the Ford Crown Victoria was the industry standard. But since the Blue Oval boys retired the Crown Vic, there’s been a scramble among the Detroit manufacturers to exploit the police market, and Dodge hopes that by letting officers thrash some Chargers they might win more contracts.

Naturally, just like the Blues Brothers’ car, the Charger Pursuit has got cop tires and cop brakes to go with the cop engine. And in a modern update, the in-dash touch screen infotainment system connects to police agencies’ computer systems.

“This is the most unique test drive in the industry, allowing you to get behind the wheel on courses specially engineered to challenge both you and the vehicle,” said Bick Pratt, head of government sales and operations in a press announcement. “You can experience firsthand the top-selling, pursuit-rated police sedan in the country on these courses.”

Unfortunately, cops are keeping all this tire-squealing fun to themselves, so if you want to play you’ll have to consider a few months at the police academy first. Hey, it’s probably just like the movie was.