The Three-Row, 475-HP Dodge Durango SRT Is the Family Hauler From Hell 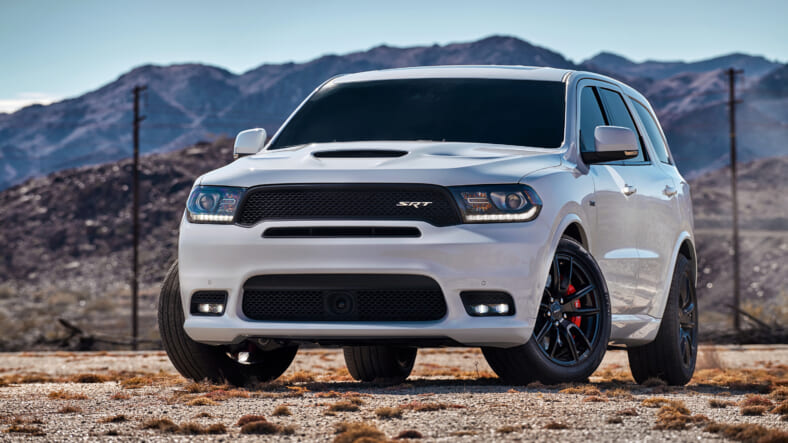 When BMW introduced the X5, its very first crossover SUV at the 1999 North American International Auto Show, they had retired Formula One racer Gerhard Berger on hand to vouch for its dynamic qualities.

After the press conference, I asked Berger if he was surprised that BMW had decided to build a truck. “You think thees ees a truck!?” he snapped in his Austrian accent. Well, if it walks like a truck and quacks like a truck…

The challenge of combining agile sport sedan handling with rugged four-wheel-drive attributes seemed too tall an order to me. And so it was, for a time.

Porsche introduced the Cayenne, a family hauler with the ride of a race car, so that didn’t seem like an ideal blend of attributes either.

But over time, these companies, along with Jaguar, with the F-Pace, and others, have succeeded in producing big, all-wheel drive crossover wagons that are as good at hauling mulch as hauling ass, and they even provide acceptable everyday ride quality.

Now Dodge has joined that elite group, with the $62,995, 475-horsepower Durango SRT. Each one includes standard leather and suede upholstery and available high-performance Demonic Red Laguna leather seating and with carbon-fiber trim, plus a one full-day track session at the Bob Bondurant School of High Performance Driving.

You’ll want the practice, because the Durango SRT goes 0-60 mph in 4.4 seconds and cracks the quarter-mile in just 12.9 seconds, times good enough to dust many legendary muscle cars. And thanks to its automatic transmission and all-wheel drive, it will score those numbers every time, as the power all goes straight to the pavement, with no tricky wheelspin-regulating launch strategies.

At the same time, the Durango SRT earned a best-in-class 8,700-lb. tow rating, which comes in part from the enhanced engine cooling. The electronically controlled shock absorbers and monster six-piston Brembo brakes also contribute, so the Durango SRT promises to be the go-to towing machine for those of us with boats, motorcycles and race cars.

Those same electronic shocks let drivers choose the ride and handling to suit the situation. The variable driving modes also change the function of the electronic stability control system and the distribution of power to the wheels. For example, in sport mode, the transfer case sends 65 percent of the Hemi’s power to the rear wheels for that responsive, rear-drive experience.

Off the track, the Durango slogged confidently through some miserable wet conditions and churned through standing water with no trouble, reminding us of why some drivers prefer the security of a taller crossover SUV to a sedan.

Of course, you don’t want to trust such capabilities to just anyone, so the Durango SRT has a valet mode, which tricks the brawny V8 into behaving exactly like the 3.6-liter V6 engine in the Durango Brass Monkey we enjoyed so much.

But valet mode is for other people. We’ll keep the Durango in sport mode on the street and track mode on the track, where the SRT has demonstrated itself to be a worthy domestic alternative to performance crossovers from the prestige European brands.