Your Mighty V8 Will Be Replaced with a Lowly 4, and That’s OK

Turns out there is a replacement for displacement. 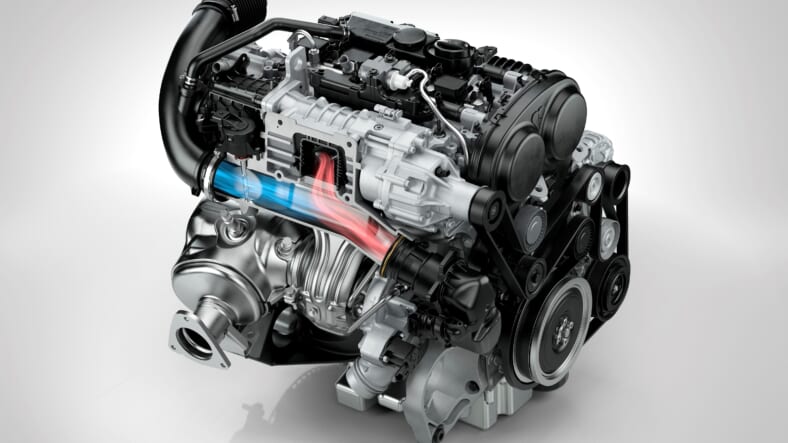 Like that V8 or V6 under your car’s hood? Don’t get too used to it, because your next car is going to be powered by a 2.0-liter four-cylinder engine. Well, statistically speaking anyway. But this isn’t the bad news it might seem.

OK, not all cars will switch to these engines, but they will become every bit as ubiquitous as today’s omnipresent 3.5-liter V6, and the first examples are arriving now. The convergence on 2.0 liters is coming because computer analysis revealed that 500 cc cylinders are an optimal size for efficiency, so we can soon expect most engines will be sized in multiples of 500 cc, with four-cylinder 2.0-liter iterations powering most future models.

We’ve recently driven several of the newest examples of this paradigm, in the form of the Mercedes E300, the Infiniti Q50 and the Volvo S90, each of which uses a turbocharged 2.0-liter four-cylinder powerplant. The Mercedes and Infiniti engines are even cousins, with some shared design aspects.

Like four-cylinder engines, turbocharged engines have also had some negative aspects. In particular has been the problem of turbo lag, or the latency between application of the gas pedal and production of corresponding power by the engine due to the time it takes the turbocharger’s turbine to spin up to full speed.

The benefit of four-cylinder engines, of course, is fuel economy. As with diesel engines, turbocharging can be applied to provide more power while preserving some of the engine’s efficiency advantage over engines with more cylinders.

But to install such an engine in a prestige car like the Mercedes E-Class presented a problem: How to quell the noise and vibration associated with fewer combustion cycles per engine revolution.

Engine balance shafts, active vibration-cancelling engine mounts, active noise cancellation through the car’s stereo and good old sound-deadening insulation can all play a part in muffling the characteristic clatter from the engines.

Driving the E300, Q50 and S90, we noticed one common characteristic: these small engines’ sound is not evident inside the cabin, where the buyer experiences it. But it is noticeable at curbside, so if impressing people in the valet line at the club is important, this could still be an issue.

The 241-horsepower Mercedes engine uses a third-generation direct fuel injection technology that can direct the spray of gasoline and squirt up to five separate shots of gasoline during an engine stroke. Meanwhile, the multi-spark ignition can zap the fuel mixture with as many as four sparks during a combustion cycle. Together, they minimize fuel consumption and creation of pollutants.

The Volvo S90 T6 supplements the exhaust-driven turbocharger with a belt-driven supercharger, ensuring there’s no lag. The turbine tag-team pumps up the S90 to 316 horsepower, vaulting the cushy sedan to 60 mph in just 5.7 seconds. Before you start looking up sports car performance specs, keep in mind that this is a 2.0-liter four-cylinder mid-to-large-size sedan.

The Infiniti Q50 uses Nissan’s own version of the Mercedes engine, which the companies are sharing under a technology partnership. But the company has its eye on an impressive innovation to give it an edge over rivals: a variable compression ratio version of the engine that will let it better balance power and efficiency on demand.

By varying compression from as little as 8:1 to as much as 14:1, Infiniti’s VC-Turbo 2.0-liter four-cylinder will produce 268 horsepower while sipping fuel like a four-cylinder should, Infiniti promises.

In the end, if these new engines let drivers continue to enjoy the power we’re accustomed to, while providing the efficiency that government regulators demand, then it is all good in our book.