Behind The Wheel Of Ferrari’s Scorchingly Sexy 488 GTB 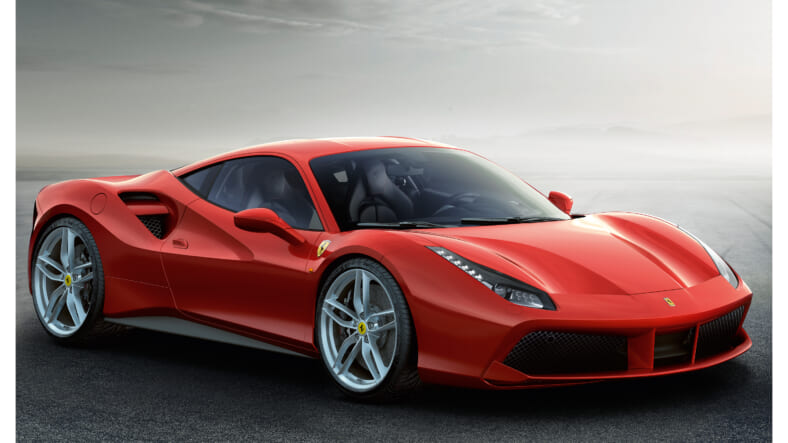 The Ferrari 488 GTB is the first Ferrari to sneak up on me. Normally I can hear my new ride’s approach as the delivery driver nears my house, prompting me to race outside to joyously greet him like an overexcited Labrador Retriever.

But this time, the first I knew of the 488’s arrival was the ring of my doorbell. The driver even had a charmingly appropriate Italian accent. But I stared at the crimson beauty crouching in my driveway, wondering how it possible got there without me hearing it.

The sweet song of the Ferrari V8 has long set the standard for sports car soundtracks. It’s perfectly tuned intake honk and exhaust shriek have been polished and improved from one generation to the next until the 458 Italia achieved auditory perfection.

That’s quite a benchmark for any new car to surpass, and the new Ferrari 488 GTB has to meet that comparison with a pair of turbochargers clogging its intake and exhaust tracts. It is the turbochargers’ muffling effect that gives the 488 its unexpected stealth.

Ferrari had good reason to install them there. In Europe, car makers are under increasing pressure to reduce CO2 emissions, and Ferrari’s solution was to eschew potentially antiseptic-feeling hybrid-electric drive in favor of more rambunctious purely internal combustion approach.

Which makes sense, considering the visceral appeal of Ferraris that comes from its spectacular engines. However wonderful those engines have been, however, Ferrari couldn’t stand still. In addition to meeting environmental regulations, the company needed to meet the ever-stiffer challenge from competitors using various power-boosting technologies such as forced induction or electric assist.

Ferrari now shows that the 488 is better in every way than the 458 it replaces, and from a few paces distance the GTB somehow manages to even look better than the Italia. The 488 GTB is Titian’s Venus of Urbino, the portrait of sensuality, carved as sculpture and reclining in my driveway.

There is absolutely no part of this car that doesn’t absolutely exude sex appeal, from its taut front fenders arching suggestively over the front wheels to the chrome cavillino rampante prancing horse on its flank. You can’t keep your eyes, or your hands, off it.

The 488 GTB’s centerpiece is the gorgeously detailed engine on conspicuous display in the expansive rear window. No car maker matches Ferrari’s attention to the appearance of the heart of the car.

As mentioned, that now-augmented heart is stronger than ever, its 3.9 liters producing 660 horsepower, compared to the old naturally aspirated 458’s lovely sounding motor’s paltry 562 hp.

This added muscle pushes the 488 GTB to a top speed of 205 mph, accelerating the car to 60 mph in less than 3.0 seconds. More importantly for sporting driving than peak power is the average power produced throughout upper range of the engine’s revs, not just power at redline.

Through the miracle of turbocharging, the 488 GTB averages its peak 660 hp over its top 2,000 rpm. The 458 Italia revved higher, but not only made less peak power, but also averaging 522 hp though its upper rev range, conveying a towering 138 hp advantage to the 488!

A visit to the track confirms that the 488 is a bullet, ripping off speedy laps at ease, as the turbocharged engine applies its incredible force to the pavement. The 488 also has upgraded brakes from those on the 458, borrowing the Brembo carbon ceramic stoppers used first on the LaFerrari hypercar.

But in use, these brakes seem to inspire less confidence than the 458’s brakes did, and the car felt a touch less stable under maximum braking, hinting that the rear end might like to come around in a way the old car never did. Maybe it is a consequence of that extra stopping force.

The beefier engine also has trade-offs, as there is a slight bit of turbo lag, as power takes a beat to build, and then hammers the driver’s back into the contoured bucket seat. And all the while, the twin compressor turbines maintain the inescapable sound of a distant teapot whistle.

Ferrari does a commendable job inside its cars, and the 488 shows one way that smart companies can eliminate the hideous Cyclops of a navigation display from staring back at us from the center of dashboards. In place of the now sadly ubiquitous infotainment display, the 488 puts those functions in small display screens flanking a centrally mounted tachometer that is still a real, physical object and not an on-screen virtual representation of one.

In a bid to borrow from the prestige of Ferrari’s Formula One racers, the 488 GTB has all of its controls mounted on the steering wheel. Now that even includes turn signals, high beam dimmer, and windshield wipers. I know Ferrari wants to cultivate the Sebastian Vettel within each of its customers, but F1 cars mount all their functions directly on the wheel because there is no space within their cramped cockpits to put them elsewhere.

The 488’s expansive cabin has ample room for conventional controls to be mounted on the steering column where they belong and where drivers can use them reflexively without having to look at the wheel each time they need to employ some regularly needed function.

And here’s an odd tidbit: all the cars in Fiat Chrysler’s inventory have adopted the back-of-the-steering-wheel audio controls from the company’s Chrysler products. They are a great solution because the volume and tuning buttons are always right at the driver’s fingertips and they take no space on the front of the wheel.

However, for some reason, Ferrari has reversed their function from every other Jeep, Ram, Fiat and Alfa Romeo, by making the right-side buttons control the tuner and the left-hand ones work the volume.

It doesn’t really matter, as the standard-equipment radio is unquestionably the worst factory radio system I’ve heard in years. It seems like an Italian reminder that you should be listening to the car’s fabulous engine.

That would surely be the case for the 458. In the 488, the car is a sultry beauty that is faster and better in every measurable way. And yet, something has been lost.