This thing is pure evil. 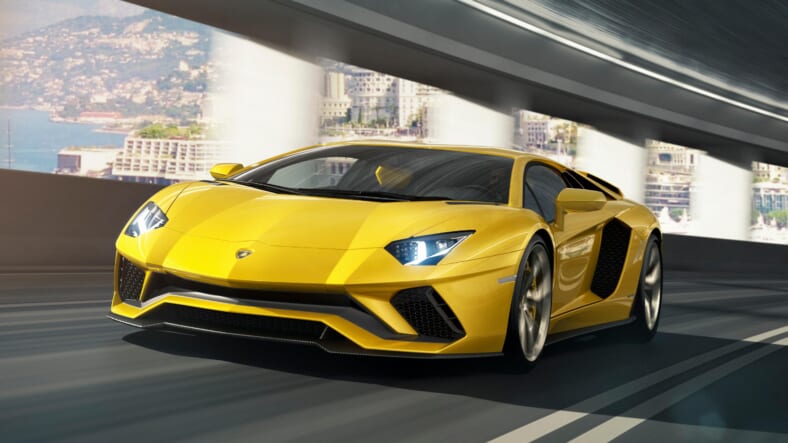 You’ll never get rich being a Maxim editor. You will, however, occasionally get the opportunity to do something so mind-bogglingly awesome, you simply don’t care.

I recently spent the weekend in Valencia, Spain, as one of the very first people on the planet to drive the 2018 Lamborghini Aventador S. With increased power (740 horses), improved handling (four-wheel steering), and an even more evil look (it literally grew fangs), the next generation of the storied Italian brand’s flagship V12 supercar is the best one yet.

Here’s what you need to know.

1. It couldn’t possibly be meaner looking.

Ever since the Countach debuted at the Geneva Auto Show way back in 1971, Lamborghinis have looked a little bit evil. This one, we’re sure, is the most villainous yet. The Aventador S sits lower and wider than its predecessor, its every line emphasizing the aggressive stance. Mitja Bokert, Lamborghini’s lead designer, says the car’s look was inspired by rocket engines, jet fighters, and venomous snakes. Look closely at the front fascia—yup, those are fangs. We’re fairly certain this is the automobile Satan uses as his daily driver.

The mad geniuses from the Northern Italian town of Sant’Agata Bolognese didn’t stop at superficial improvements; this beast has the guts to back up its killer looks. Its heart is a more powerful version of the 6.5-liter V12 the company introduced along with the original Aventador in 2011. Forty more horsepower bring the already ludicrous number up to 740, along with a more-than-healthy 690 lb.-ft. of torque. It redlines at 8500 rpm, which we took full advantage of while revving around Valencia’s Circuit Ricardo Tormo racetrack. Oh, and the sound? It’s hard to understand how something so sinister can produce music so angelic.

3. It handles as well as it moves.

The biggest difference between the Aventador S and the previous model is the addition of four-wheel steering. At low speeds, the rear wheels go in the opposite direction from the front, virtually reducing the wheelbase and improving agility. At higher speeds the wheels all turn the same way, providing greater stability. I got to compare the current Aventador with the new version on a slalom course, and the difference was dramatic. Zipping around cones in the new model was a breeze—the car felt far more agile than a 3693-pound piece of machinery ought to.

When at higher speeds on the track, the big fella was simultaneously responsive and stable, very happy to change direction quickly. This, no doubt, was helped by a new aerodynamics package that Lamborghini claims increases downforce by 130 percent. An active rear wing alternates between three different positions depending on speed, which, as an unintended side effect, might give savvy cops a hint about just how much you’re speeding.

4. Your driving experience is personalized.

The Aventador S introduces an all-new driving mode to the Lamborghini famiglia, appropriately named Ego. Unlike Strada (street), Sport, and Corsa (track) modes—which are fixed—Ego allows you to customize the traction, steering and suspension settings to whatever you like. So, say you want the quicker shifting and tighter steering of Corsa, but you’re driving over bumpy roads and need a more forgiving suspension, Ego lets you do it. (Yes, I am writing a strongly worded letter to the mayor of Valencia: Let’s smooth up those streets!)

A persistent—and not always unfounded—criticism of Lamborghinis is that they have neither the handling capabilities nor the everyday reliability to match their insane looks, power and price. The Aventador S puts a muzzle on that talk. It’s a world-class athlete on the track, its suspension and handling worthy partners to the monstrous V12. And yes, it’s a 217-mph supercar that goes 0-60 in under three seconds and costs $421,350 before any options, but it’s also shockingly easy to maneuver around town… assuming you don’t mind sitting for an impromptu photo shoot every time you park.

I suppose that’s the price of riding with the devil.