The Ducati Monster 1200 R Is Naked and Unafraid

Ducati’s most powerful naked bike is a full-on thrill ride. 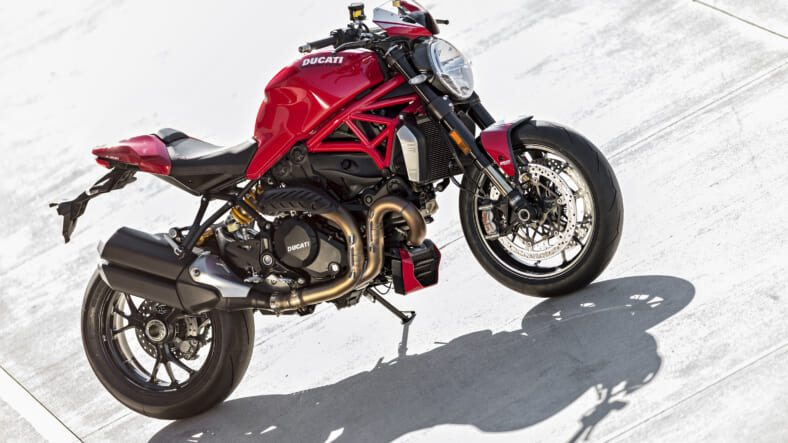 I’m slowly getting over a torturous, longstanding infatuation with redheads, so you can imagine the overwhelming sense of self-loathing I experience when I throw a leg over bright red 2016 Ducati Monster 1200 R—the most powerful naked bike to come out of the motorcycle manufacturer’s Bologna factory—and immediately melt with desire.

One groggy cough comes from the Monster’s cold, 1,200-cc, narrow-angle V-twin engine, and I’m hooked. Waiting for the bike to warm up, I sink into its deep, cradle seat until I’m snuggly straddling its swollen fuel tank. I squeeze the light clutch lever tight enough that my leather gloves creak. I’m unexpectedly giddy; it’s just after dawn in L.A., I haven’t had any coffee, and there’s a dense fog, but that means Angeles Crest, a fantastic riding road just north of the city, will be empty and I can get to intimately know this alluring Italian ginger.

A “1” pops on the digital instrument display as I put the Monster in gear, drop the shield on my Arai helmet, and start down the street. As I play with the tight throttle, the exhaust spits and snarls in rapid bursts, its sound resonating between houses.

I merge onto the highway, shift into second gear, open the throttle fully, and the front tire lifts further and further off the pavement as the 160-horspower engine builds revs; the Monster’s “anti-lift” system can prevent this, but it doesn’t work in Sport mode. I shift to third, the tire drops, and I get to Angeles Crest in half the time it usually takes.

Only a few bicyclists and a guy in a gorgeous Lotus Elan S2 are on the canyon road, and I jump in front of them just before the first set of turns. The Monster R’s Brembo brakes are stupendous, biting instantaneously and insanely hard; I use every inch of arm muscle to push against the wide, flat handlebars as the bike’s front end dives down.

Most notably, though, the Monster R’s suspension is higher than the setup on Monster S. Only by about an inch, but that inch affects the bike’s wheelbase, tightening it up a bit, as well as the bike’s lean angle, allowing it to keel over a fantastic 50 degrees.

I slide off way off the side of the Monster’s slippery, two-up seat, which is capped off by removable rear cowl, and keep my body as low as possible as the 456-lb Monster 1200 R and I dive deep into the first set of turns. I keep the throttle steady as I transition from side to side, weaving the Monster through steep, uphill switchbacks. The big, bright halogen headlight cuts through the fog and helps me see the road clearly.

The front tire skips along the pavement as I accelerate out of a hairpin onto a long straight, hitting triple digits well before I have to clamp down on the brake lever and set up for the next set of turns. A whiff of burning brakes follows me for the rest of the riotous climb up Angeles Crest, one of the best I’ve had.

I stop when I unexpectedly emerge from the thick fog and see the bright morning sun peeking from behind the mountaintops, and I pull over to take a picture of the white blanket laying over downtown Los Angeles. I get back on the Ducati Monster 1200 R and, again, melt. But this time I don’t feel an overwhelming sense of self-loathing but instead a powerful rush of unfettered delight.

I finish my ride up Angeles Crest on the Duc, head back down, and then do the same climb and descent again. That’s how engaging, exciting, and enjoyable the Ducati Monster 1200 R is, and it makes we wonder if I’m being too gung-ho about getting over redheads after all.