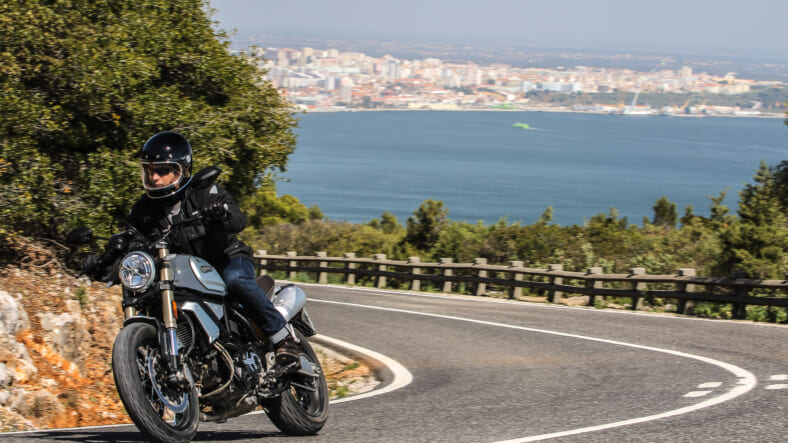 It wasn’t the random stray dogs, but the little old ladies walking along the twisty country road, that seized my attention. They weren’t entirely out of place, just totally unexpected.

I’m on a lovely backroad in the Portuguese countryside headed to the coast, flying through alternating orchards, fields and forest punctuated by little villages every few miles. And in between, in what seems like the middle of nowhere, are these arbitrary pedestrians. I just can’t picture my grandma — or anyone’s grandma that I know — dressed in a skirt trekking several miles to town. But this is Portugal, and everything is a bit unexpected in a very pleasing way.

My ride is the new 2018 Ducati Scrambler 1100. It’s bigger, beefier and more powerful than any Scrambler in the Italian’s lineup to date, and it too is unexpected in a very pleasing way.

Leaving the old industrial port section of Lisbon that morning and negotiating the city traffic and narrow cobblestone streets, I was a little concerned about the nimbleness and handling of the 450lb. motorcycle. Once on my way, however, those concerns quickly evaporated. Not only is this bike well balanced, but it’s responsive, smooth, offers plenty of torque and is loaded with hi-tech safety features like traction control, cornering ABS and three dynamic riding modes. And as for the traffic, I don’t think I’ve ever encountered city drivers as gracious and polite as those of Lisbon… definitely an unexpected surprise.

Blowing down the freeway and rattling across the famous twin of the Golden Gate Bridge, I wish I could’ve looked around and appreciated the depth of history from these heights (after all, this is where Vasco da Gama sailed from and helped launch little Portugal into one of the world’s richest and most influential nations of the age). Instead, the cross winds and rush hour traffic — no matter how civilized the drivers — demanded focus and the Scrambler delivered on every request confidently, mannerly and assertively.

Some miles south of the capital I peel off the freeway onto the country road toward the famed Arrábida, a region renowned for its beauty as well as its exhilarating roads. Designated as a Nature Park (akin to our national parks), it’s a peninsula of rugged hills, forests, beaches and spectacular ocean views, and it’s on the way here that I pass through what would come to define Portugal for me: modest villages, picturesque countryside, welcoming residents and, yes, the odd roadside rambler.

Ripping along the curvy rural road I get my first taste of the Scrambler’s safety features. I’ve just passed a large truck, my speed is reasonably fast, I head back into my lane, round the bend, and immediately hit a series of ridges that old tree roots have created underneath the pavement and then a massive pothole. I can’t believe it, but the Ducati carries me through unscathed. If I had been on one of the vintage bikes I like to ride, I’d have unquestionably wiped-out. Hats off to modern technology.

The Arrábida is as beautiful as people say it is. And just as good is the country’s food — simple, unpretentious, and delicious. Sitting on the sunny terrace of a local beachside restaurant with my seafood lunch, looking at my handsome steed basking in the rays with the white sand and shimmering blue ocean behind, I wonder if, like George C. Scott’s character in the classic movie The Last Run, I could live here permanently, taking on various clandestine driving jobs to pay the bills. The thought is extremely attractive.

Back astride the Scrambler, I hit the highest-most loop on the Arrábida peninsula that features a series of silky hillclimbs above the water, lovely twists through the heather, and then a velvety descent into the cultivated countryside. All the while, as I cycle through the gears, the motorcycle releases that delicious throaty chorus that’s so distinctly Ducati. The hills are alive with the sound of music.

This is really about as good as it gets. The recipe of this moment — the bike, the weather, the country, scenery and people — is something you never want to let go of.

Admittedly, much of this was unexpected and I come away impressed with both Portugal and Ducati’s newest, greatest Scrambler. As a solid “all-rounder” bike — adept on city streets, major freeways and country roads — not to mention that it’s reasonably priced, well equipped and rife with Ducati cachet, it’s hard to imagine a better package anywhere, for Lisbon or Los Angeles.

I’ll probably never relocate to Portugal, either as a courier for smuggled goods or a law abiding citizen, but if I did the 2018 Ducati Scrambler 1100 would definitely be my choice of transportation.