The guitar god opens up about his garage full of rocking rides. 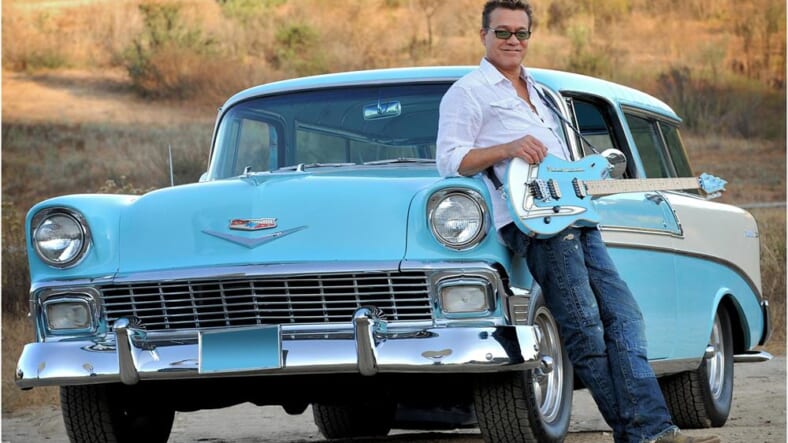 Our friends at Car and Driver scored prime tickets to an Eddie Van Halen show—the one where he spills the details on his fleet of cool cars and penchant for high-speed driving.

It turns out that on a visit to California’s storied Sonoma Raceway to drive one of his custom supercharged Audi R8s (he has both a V8 and a V10), Van Halen was in a major hurry piloting his wife’s Mercedes-Benz ML63 AMG and got clocked by police going more than 90 mph. Ouch, that one’s gonna hurt, you might think.

Unless your name is Eddie Van Halen, of course, in which you’ll get off because the ticket-writing officer’s captain is a diehard Halen fan.

“We get home and I get a letter from my office; the patrol guy who gave me the ticket, his captain voided it,” Van Halen told Car and Driver. “He said, ‘You don’t give Eddie Van Halen a ticket,’ and I had a letter to prove it.”

The rocker was rhapsodic about his Porsche 911 GT3 RS, insisting that unlike all the other 911s he’s spun on the track, this new one sticks so well that he hasn’t even been able to spin it. “It’s the first time ever I’ve been able to four-wheel-drift a Porsche,” he said. “Every other Porsche I’ve ever had, I’ve spun them all.”

EVH has a soft spot for the classics, and not just the ones in his band’ catalog. Aside from those Audis, Porsches, assorted classics and a past penchant for Ferraris, he also owns a demonically crimson Lamborghini Miura.

Just the kind of ride you need when you’re Runnin’ with the Devil.