Behold, the Self-Flying Drone Taxi of the Future

Where we’re going without steering, we don’t need roads. 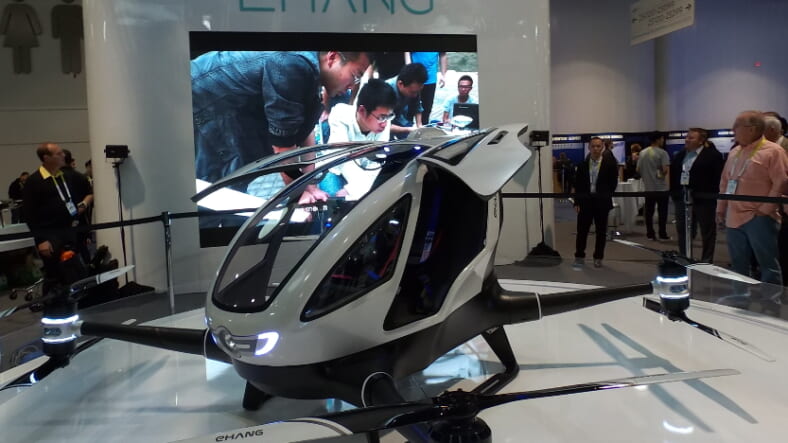 Amongst a bevy of unmanned aerial vehicles (safely) buzzing around various booths here at #CES2016, one stood out to us. Way, way out. And it was standing still.Chinese drone manufacturer Ehang has created a vehicle capable of autonomously transporting an actual human passenger and their bags—weighing up to a combined 220 pounds—at 60 MPH for 23 minutes, without the need for a pilot’s license or in-vehicle navigation. In other words, it’s a personal flying taxi that puts self-driving cars to shame—at least for relatively short distances.Named for its ability to carry 1 passenger with its 8 propellers and 4 legs, here’s a video of what the 184 looks like up close:

Its automated navigation is enabled by a real-time flight command center. So you just step into the air conditioned, Wi-Fi laden cockpit; press where on the map (as pictured below) you want to go; sit back and enjoy the ride. Ehang’s George Yan sees this pre-programmed flight pattern as a huge safety benefit: “We think that eliminates 80 or 90 percent of the problems we’re gonna see here.” This is reassuring, should it take off (popularity-wise) and create the kinds of skyward traffic we’ve seen so far only in futuristic movies.

So what about drones to travel longer distances or with multiple passengers? According to Yan, “From a design principle perspective, the hardest thing is battery time.” With today’s Lithium technology, the max appears to be 30 minutes of flying time. But breakthroughs may be on the way in as soon as the next six months, in part thanks to their work on fuel cell development with labs at such research institutions as MIT and Stanford.Speaking of safety, this drone is equipped with multiple redundant backup systems. For example, even if three of its independent engines fail, it can still land safely under the power of the last remaining one.They estimate its cost at $200,000 to $300,000 and it may even be available within the year. In the meantime, check out this video for info on the inspiration behind its creation.