This super jet’s jaw-dropping interiors include a bison horn beer tap in the wet bar. 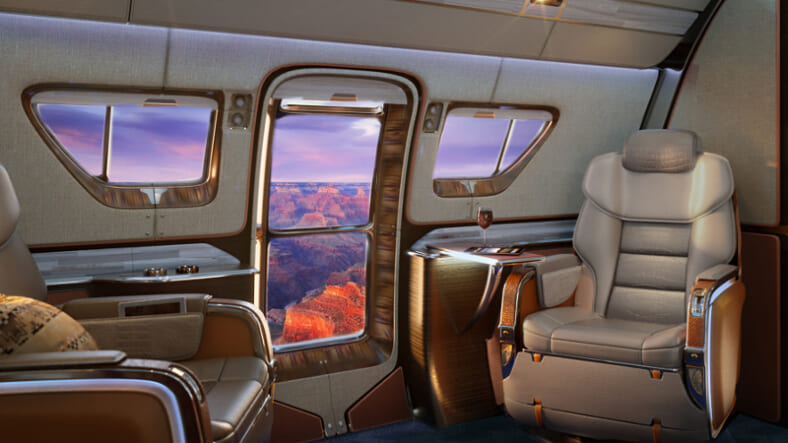 The difference between 1-percenters and .01-percenters is simple: the former are content to simply fly in a private plane, the latter trick out their own giant jets to the gills.Based on an Embraer Lineage 1000e, the SkyRanch One concept defines a casual elegance that designer Eddie Sotto categorizes as “complicated simplicity,” whatever that means.Like the “Kyoto Airship” layout, it too features ample window space—especially in the door area. But the overall motif is way more Western—Southwestern more specifically, “with some Spanish and Portuguese flair,” as Embraer’s VP of interior design told Business Insider. One shining example of this is the bison horn beer tap featured in the galley’s wet bar.

Visually textual and inherently tactile rich materials complement fine features throughout the modular layout. In other words, think of SkyRanch as a supremely comfortable canvass on which to paint whatever opulent desires float your boat.

Because at the end of the day, it’s all about making you and your 12 to 18 fellow passengers feel as relaxed and pampered as possible. And with a bottom-line price tag in the $70 to $75 million range, that seems like a strong likelihood.

The only problem is that after this, you’ll never want to stoop down to flying commercial first class again.