Now’s Your Chance to Be Evel

Evel Knievel’s jump stunt bike from ‘Viva Knievel!’ is up for sale. 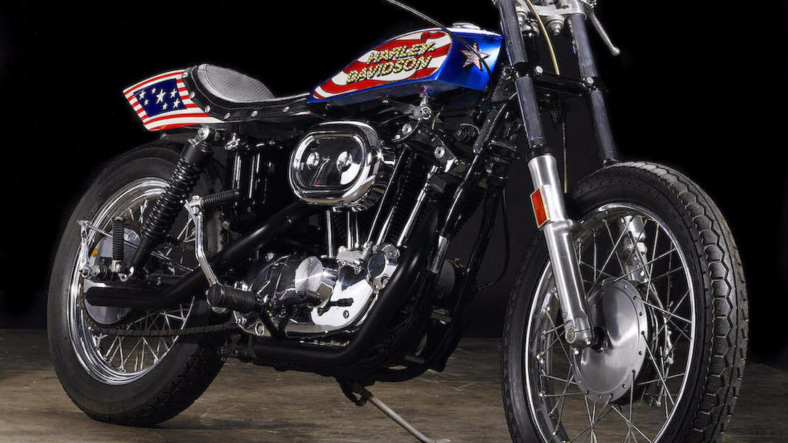 No one captures the zeitgeist of the 1970s more completely than the star-spangled motorcycle stunt rider Evel Knievel. Such was his fame that he not only enjoyed a biographical movie about himself, with George Hamilton in the lead role, but he also appeared in his own star vehicle titled Viva Knievel! A new film portrayal of Knievel is in the works now.

While the man himself appeared in Viva Knievel!, his purpose-built lightweight Harley-Davidson XR-750 stunt bikes did not. As their stand-ins, Warner Brothers commissioned construction of several look-alikes built from standard Harley XL1000 Sportsters.

Los Angeles Harley dealer Dick Hutchins handled the bikes, delivering them to famed bike builder Bud Ekins for conversion into convincing-looking stunt machines. When the movie was finished, Hutchins bought this bike for display in his Yucca Valley, Calif. museum.

Bonhams auction house will offer this bike for sale at its Las Vegas motorcycle auction January 7. It is an appropriate venue, as Las Vegas was the scene of Knievel’s most famous stunt, his jump of the fountain in front of the Caesar’s Palace casino in 1967. Knievel made the jump, but was severely injured when he couldn’t stick the landing.

The bike is expected to sell for between $80,000 and $100,000. Another bike from the film, the Batman-esque Stratocycle was offered on eBay in September for $200,000, but did not sell. This stunt bike has been freshly restored, with a new paint job by George Sedlak, who painted Knievel’s bikes back then.