Why This Iconic Yellow Ferrari Could Fetch $8 Million at Auction

The original Ferrari 275 GTB has been called “the most satisfying sports car in the world.” 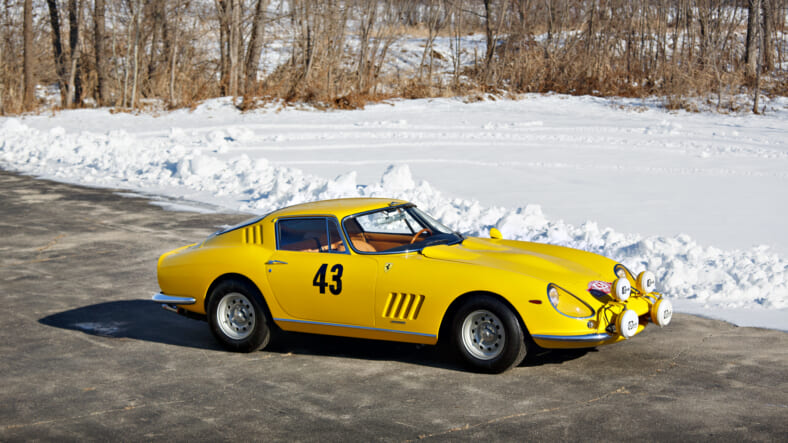 The Ferrari 250 GTO is widely considered to be the world’s most beautiful sports car. It’s also the world’s most expensive, which means all but a few mega-rich collectors will ever get their hands on one.

However one of its successors, the Ferrari 275 GTB, is equally gorgeous; Road & Track even called it “the most satisfying sports car in the world.”

And now the ultimate 275 GTB, the very first one built, is coming up for auction at Gooding & Co.’s Scottsdale sale Arizona on Jan. 18-19, where it’s expected to bring in $6 million–$8 million. Adding to its appeal, the car, which was built in 1964 and has been hidden away for the last 25 years, competed in the famous 1966 Monte Carlo Rally.

“There is growing interest in historic rally cars today,” David Brynan, one of Gooding’s classic car specialists, tells Maxim. “While most rally cars were developed from fairly pedestrian production cars, this one offers the ultimate bragging rights. Not only is it a 12-cylinder Ferrari that ran in the most infamous edition of the Monte Carlo Rally, but it is the very first 275 GTB built – the prototype of a model that is regarded as one of the most famous, iconic and collectible classic cars of the era.”

The 275 GTB has always been extremely cool, thanks to its menacing looks and the fact that it was the ride of choice of legendary badasses like Miles Davis and the young Clint Eastwood, neither of whom ever paid much attention to speed limits. The famously volatile Davis also had a Lamborghini Miura that he used to drive around with a loaded .375 Magnum in the glovebox.

As Ferrari’s factory prototype for what would go on to become one of its greatest sports cars ever, as well as its exceptionally rare rally kit competition kit including a full set of rally lights, this 275 probably belongs in a museum.

But if you prefer to drive the hell out of it, Miles Davis-style, we heartily approve.