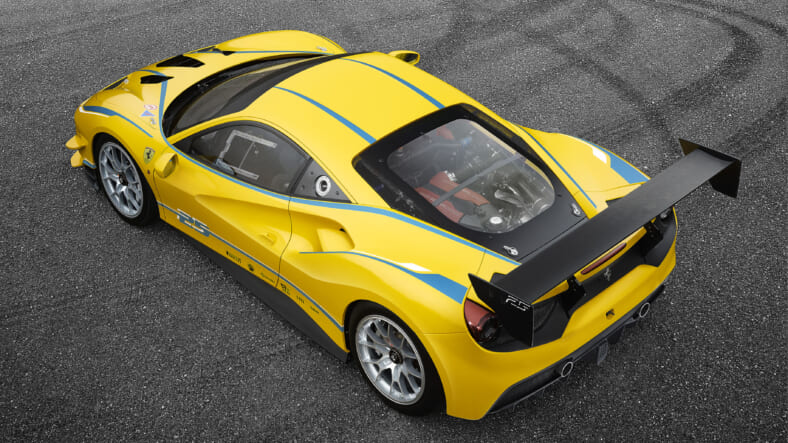 What’s the point of having a fabulous Ferrari 488 if there’s no place to properly exercise such a gorgeous turbocharged Italian beast? The Ferrari Challenge racing series gives owners a place to race their identical cars against one another so drivers can really use their prancing horses to their maximum capability.

Ferrari builds a special version of each generation of its mid-engine V8 model ever since the 348 specifically for its in-house racing series, and now it is time for a new car. The company rolled out a canary yellow 488 Challenge car during the weekend’s Finali Mondali end-of-season racing celebration at Daytona Motor Speedway.

This new model has revised programming for its twin-turbocharged 670-horsepower 3.9-liter V8 engine to deliver power in a way that is faster on the track rather than easier to drive on the street.

Similarly, the transmission’s gear ratios are lower, for better bursts of acceleration out of corners and down the straights of the tracks where the Ferrari Challenge competes. The 488 Challenge can rocket from a standing start to redline in 4 gear in just six seconds, providing ideal performance for racing on closed circuits.

A cool feature for the new car is that it has three of Ferrari’s Manettino control knobs on the steering wheel that let the driver make adjustments to the car’s electronic control systems to reflect the needs of the specific track, conditions and driver preference.

Ferrari’s Formula One cars have long used these kinds of controls on the steering wheel to let its drivers tune their racers on the fly, and they provide a link between the race cars and the street cars when installed on models like the 488.

The trio of Manettinos on the 488 Challenge let the driver address braking and electronic stability control. One knob is dedicated just to adjusting brake bias between the front and the rear of the car, while the other two are for the stability control system.

One of these knobs adjusts the threshold at which point the computer begins to intervene when it detects that the 488 is sliding, letting the driver decide exactly when it will provide assistance.

The second stability control Manettino controls how forcefully the computer will intervene when it cuts power to help regain traction.

In other news from the Finali Mondali event, the one-of-a-kind last-ever Ferrari LaFerrari that was auctioned to benefit Italian earthquake relief sold for $7 million, easily topping the $4 million auction price of used LaFerraris that have reached auction previously.