Yes, we got pulled over. 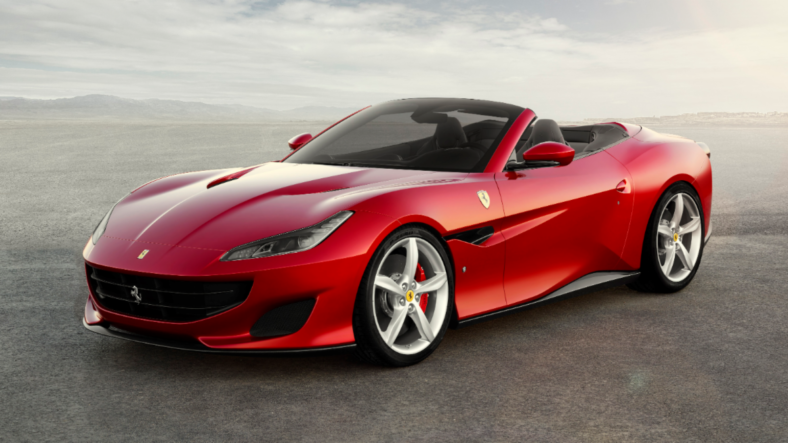 And so began. You give a man a supercar with nearly 600 horsepower capable of speeds of nearly 200 mph and then ask him to drive 65 mph. Unrealistic, right?

I was in a new 2018 Ferrari Portofino convertible driving from New York City up to the Catskill Mountains for a weekend getaway. It was a beautiful autumn day—bluebird skies, warm sunshine, the colors just starting to appear in the hardwood forests that extend all the way up into Canada—and then, an hour into my three hour drive, the flashing lights and screaming siren.

Ferrari unveiled the Portofino last year to wide acclaim. It replaces the California T—a model that, despite petty criticism of its front end looks, was a joy to drive—and is considered the “entry level” Ferrari.

But if someone actually calls the glorious Portofino an entry level car, they need to have their head examined. Priced at around $230,000 with a few options tossed in, it’s definitely a bargain compared to the $2.2-million La Ferrari Aperta, but, c’mon, it’s still quarter-million dollar ‘Rari.

Both the design and the performance of the Portofino are just about everything you’d expect from arguably the most important luxury sports car maker in the world.

Led by the immensely talented Flavio Manzoni, Ferrari’s Head of Design, every aspect of the Portofino is an execution of performance art. I remember sitting in his office in Maranello listening to him compare the shape of a car to the human body—a woman’s body to be exact.

It was very reverent and made me realize that this is a man whose approach to designing automobiles is not much different than Michelangelo’s. There’s an infusion of harmony in the creation of a Ferrari. Yes, tremendous force and power are at the core, but it’s wrapped in a package of sensual beauty.

And, believe it or not, the Portofino could rightly be a daily driver. With a comfortable interior that’s actually conducive to grand touring (it is a GT after all), a trunk that accommodates one medium-sized suitcase (crazy, right?), two back seats (albeit for children), and—the best part—a hardtop that folds at the touch of a button, there are no compromises for the occupant.

As for performance—the basis of every Ferrari—let’s say most of us will never take the Portofino to its limit. With a 3.9-liter twin turbo-charged V8, this Prancing Horse delivers 560 foot-pounds of torque from 3,000 rpm and can go from 0-60 mph in 3.5 seconds.

It offers three dynamic driving modes—comfort, sport and racing—that are selected by a red switch on the steering wheel I dubbed the “joyswitch,” and an on-the-fly dampening button. Powering through the 7-speed F1 dual-clutch via the perfectly positioned carbon fiber paddle shifters means Nirvana is only seconds away.

And Nirvana was indeed found. It’s a road following the Beaverkill River that unfolds like a silk ribbon with the smoothest curves and hills imaginable, almost as if it were engineered for just these moments.

The owner of the nearby Catskill Brewery, who had earlier given me a tour of his award-winning brewhouse, was behind me in his new Porsche 911 GT3. Of course, a companionship like this can only lead to one outcome, and so embracing the inevitable we turned onto the rural byway only too eager to let the horses run.

It was a hyperdrive-to-lightspeed experience, and it was magnificent. Switched to sport mode via the joyswitch, the Portofino catapulted down the road with a roaring howl. Seventh gear was reached almost instantly and, with the G-forces pressing me firmly in my seat, the Ferrari held the road, entered the curves and crested the blind hills as if it were a weightless magnet on a sheet of metal. Never was a game of tag more fun.

Best of all, the handling and behavior of the Portofino is as tame or wild as the conditions demand or the driver dictates. After the exhilaration of the Catskill country roads, the Portofino was finally subjected to excruciating Manhattan traffic.

Despite the misery it must have felt to crawl inch by inch after swallowing up miles like the Millennial Falcon, it met the challenge—and everything in between—with effortless grace. And with those irresistibly aggressive yet voluptuous looks, it was the center of attention wherever it went.

Which brings me back to my encounter with law enforcement. Apparently, a Ferrari with very similar numbers as mine had been reported stolen some time ago.

So after some patient interrogation and fact-checking, the officer bid me good day with a friendly but stern warning to obey the speed limit—an understandable but wholly unrealistic request.