Ferrari’s first plug-in hybrid car is also its most powerful. 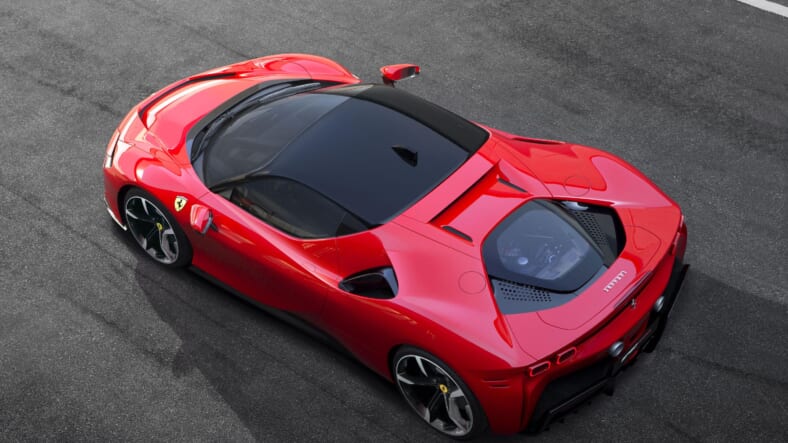 Ferrari has unleashed its fastest, most powerful road car to date: the SF90 Stradale.

The Stradale packs a minutely larger, 769-horsepower version of 4.0-liter, turbocharged V8 found in the 488 Pista. No big deal, right?

Wrong. Another 217 horses come from three electric motors—two in the front, one in the back—bringing total maximum output up to 986 hp.

The power is fed to all four wheels via Ferrari’s most advanced drivetrain ever: a retooled eight-speed, dual-clutch transmission that’s capable of making shifts in just 200 milliseconds.

Th Stradale will blast to 62 mph in 2.5 seconds and max out at 211 mph. As CNET’S Road Show notes, its top end is actually slightly less than that of its predecessor, the LaFerrari. But it’s also full second quicker around the Italian automaker’s Fiorano test rack, which was no doubt more important to designers and engineers.

Speaking of Road Show, here’s how they described seeing the latest Prancing Horse up close:

In person, you can quickly appreciate how dramatically low the Stradale is, and how aggressively forward the cabin sits. The large greenhouse makes for excellent visibility from the inside, while on the outside the way the roof and A-pillars are blacked out by default give it the air of a concept come to production. The inset intakes just aft of the doors are positively massive — owners of small dogs will want to pull them close when one of these drives by — and the nose is dominated by a prominent wing not unlike that on the Pista, but somewhat more subtly integrated.
It’s the rear, I think, where many may struggle to “get” the Stradale. The core “trimaran” shape is dramatic, a pair of dark channels highlighting the massive split diffuser that extends half-way up the back of the car. But the round exhausts, Camaro-like square taillights and random gills on the side conspire to make an overall very busy posterior.Viewed from above, however, the car looks remarkably clean and purposeful, the obligatory flying buttresses soaring back to support the rear wheels in a shape that Ferrari calls “the slingshot effect.”

Inside is what Road Show calls Ferrari’s “most progressive and dazzingly high-tech interior.” The pinnacle of the cockpit is a whopping 16-inch screen that displays all gauges and infotainment.

Behind that is a HUD that projects different info based on which driving mode your in. You’ll see navigation directions on a weekend getaway, or engine stats on a track day.

Virtually all functions can be controlled via the steering wheel via a few physical buttons and capacitive-touch panels—similar to the technology behind smartphone touchscreens.

No word on price, but the LaFerrari is currently going for seven figures, so the sky’s the limit. All we know is that we’re ready for a test drive.