Meet the little brother of the 2020 Ford Bronco. 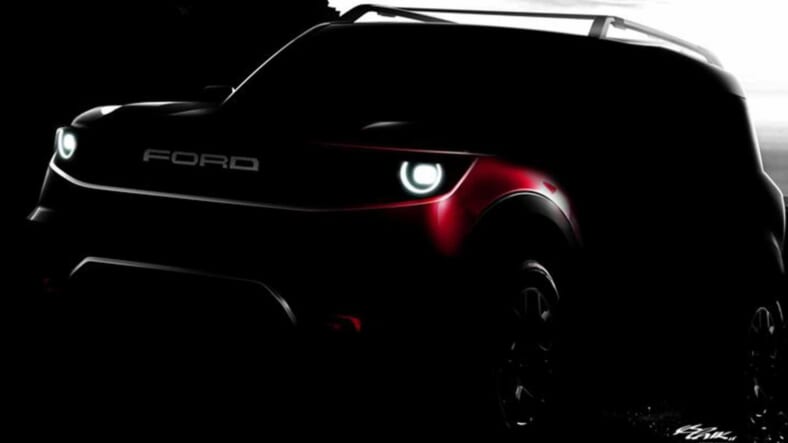 There’s no shortage of excitement for the long-awaited return of the Ford Bronco. But images shown at a recent Ford dealer meeting in Las Vegas have revealed the first look at Ford’s smaller crossover SUV that’s affectionately being called the “Baby Bronco.”

Ford had previously announced that the smaller crossover was coming, though nothing had been made official in terms of details or looks. From the pictures that first spotted by Bronco6G.com, the Baby Bronco appears to have some off-road outfitting like a roof rack and front tow hooks.

The prominent Ford logo in the grille seems to add some uniformity to Ford’s SUV line, since it’s reminiscent of every Raptor that Ford has planned for the coming year too.

Rumors are that Ford has intentions of making the Bronco line a subdivision of their company and public excitement is reaching a fever pitch in advance of official word from Ford themselves.

In the interim, these leaked pictures, one of which shows the Baby Bronco in the shadow of its full-sized big brother Bronco, indicate that Ford is diversifying the SUVs within its Bronco line, similar to the one-two punch of the Explorer and Escape.

What the Baby Bronco packs under the hood can only be guessed at for now, but Ford has made it clear that they’ll be placing a new emphasis on hybrid drivetrains for many of their future offerings– including the 2020 Ford Escape–and it wouldn’t be out of line to assume that the Baby Bronco would get a similar treatment.

With the full-size Bronco set to be an absolute beast of an SUV, it’s not shocking that Ford would be leveraging on that excitement to further the sub-class in a way that’s appealing to urban and suburban customers alike, ones that want the versatility, ruggedness and power of the Bronco but in a smaller form factor.

If these images are any indication of the style Ford is packing into the Baby Bronco, there’s no question it’ll be a successful addition to their 2020 lineup.