BMW Has A Flying Motorcycle Concept, And The Future Suddenly Looks Pretty Awesome 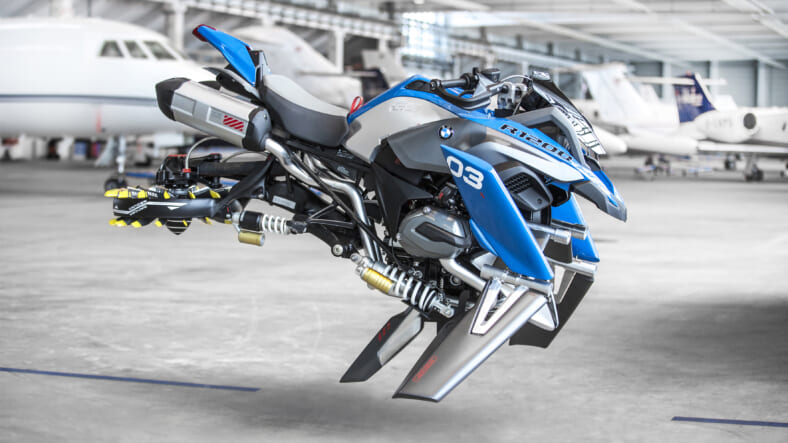 You can always count on the designers at Lego to provide a dose of “what if” when presented with an idea, so when Lego Technic’s team produced a snap-together model of a flying BMW motorcycle, the Bavarians were so inspired that they, in turn, built a full-size version of the concept.

So we have a case of life imitating art, which is imagining a future version of life. The Lego designers sought to create something fresh, using only the pieces of the kit for making a Lego BMW R 1200 GS Adventure bike.

Lego Technic likes to offer 2-in-1 kits that let customer build either of two finished products from a single kit, and that was the motivation of the team that produce the Hover Ride variant.

BMW’s design department maintains a farm team they call the BMW Junior Company, for young designers working to perfect their talents before promotion to the big leagues. They were so inspired by the Lego Hover Ride model that they built one in full scale, though unfortunately, they couldn’t find a way to make it fly.

“It was incredibly inspiring to see colleagues from different disciplines working with our trainees,” said BMW’s trainer for technical model-making, Markus Kollmannsperger. “Everyone involved in this project learned an awful lot.”

The full-size model of the Hover Ride Design Concept appeared for the first time at LEGO World in Copenhagen this week, and it make additional appearances in Europe to sites such as the BMW Group Research and Innovation Center Munich and the BMW Welt museum. In the U.S., we’ll have to settle for the Lego model.