This won’t make the All-American supercar’s waiting list any shorter. 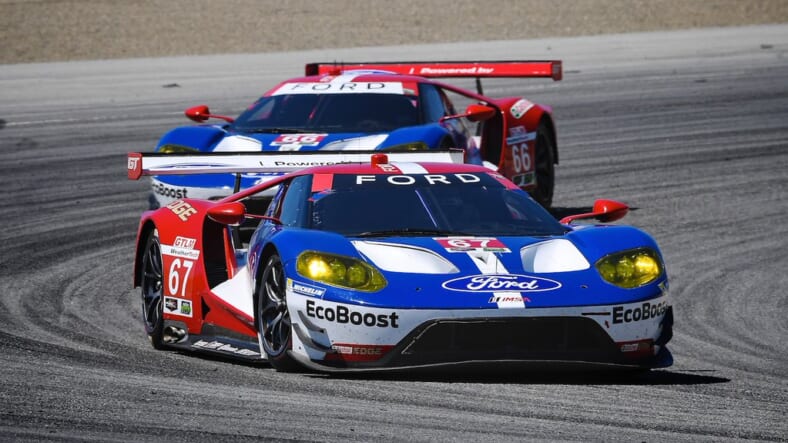 If you want to buy one of the 500 $450,000 Ford GTs that the company plans to sell in the next couple years you have scrap with the thousands of others who have already petitioned the company for one of the purchase opportunities.

But if the old adage “Win on Sunday, Sell on Monday,” holds any water, then your chances of getting one of the American supercars took a hit yesterday when the Ford Chip Ganassi racing team scored the car’s first win in the Continental Tire Monterey Grand Prix powered by Mazda at historic Mazda Raceway Laguna Seca.

The team hit mechanical woes in the season opener at Rolex 24 Hours of Daytona, then ran the distance for the Mobil 1 Twelve Hours of Sebring. Now, in the two-hour California sprint race, the GT was finally able to show its potential, scoring a win in large part thanks to the efficiency of its EcoBoost twin-turbocharged V6 engine.

“We’ve been waiting for this win for a long time,” said Dave Pericak, global director, Ford Performance in a press release after the race.

“I think it’s great that it came as a fuel economy win. It’s great for Ford EcoBoost, because that’s what it’s all about, but this is really a boost for the team going into Le Mans. We’ve been working up to this point to showcase the car’s durability and I think this is what the team needed to go to Le Mans.”

Ford has entered the two U.S-based Ganassi GTs, along the team’s pair of European-based GTs for a four-car assault on the 24 Hours of Le Mans for the 50th anniversary of Ford’s legendary 1-2-3 finish with GT40 race cars in the 1966 race.

If the Ford GT wins that race, the lottery to buy a street-legal version will only get harder.