Get ready, because it’s going to be everywhere before you know it. 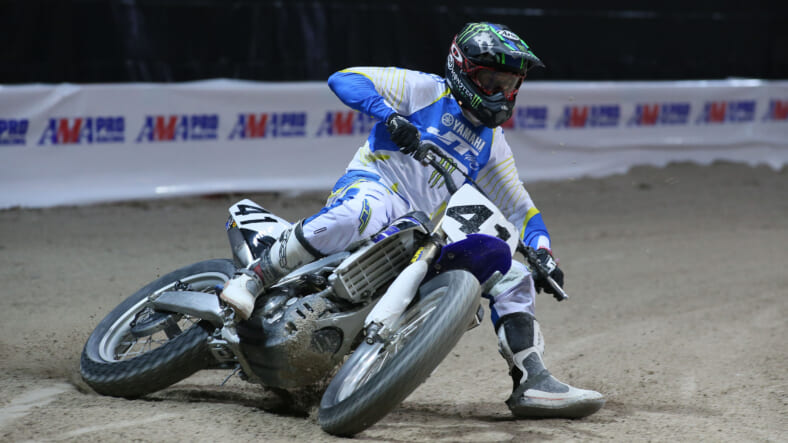 Don’t think of this as gentrification but a changing of the guard. Late last year at the AMA Pro Flat Track finals in Las Vegas, the stalwarts of the sport—the father and son with matching mullets, the wrinkly man wearing a dozen pieces of moonstone jewelry, and the obese woman resting her feet atop her mobility scooter and a bucket of buttered popcorn atop her belly—were joined in the stands by some of the people who are going to pull flat track from the shadows, where it has lived for more than seven decades.

People like famed custom motorcycle builder Roland Sands, whose unruly Super Hooligan class will soon be a staple of flat track races, and AMA Pro Racing’s new CEO Michael Lock, who brings with him invaluable knowledge and experience garnered while helping run Ducati, Lamborghini, and Triumph’s U.S. operations. Sitting side-by-side were Jason Paul Michaels, owner of Orlando’s Standard Motorcycle Company, and Thor Drake, owner of Portland’s See See Motor Coffee Co. and organizer of the city’s awesome annual One Motorcycle Show. Scattered around them were builders, racers, models, and other motorcyclists of some repute, each hooting, hollering, and having a hell of good time.

Flat track is simple and easy to love. More than a dozen riders set off around a circuit covered by a 12- to 15-inch dirt base, layered with a ultra-fine clay and rock mix, and topped off with decomposed granite. They tuck tightly against the gas tank on straights, popping upright just before a turn. Bodies rotate, chests puff out, bikes lean over, and inside legs stick out straight as pebbles pelt steel-bottom boots that spark when they touch the track. The racers slide sideways in a pack, touching handlebars, lap after lap. Crashes happen constantly, racing is cutthroat, and lulls in the action are few and far between. It’s lowbrow fun that’s absolutely addictive.

The sport started its creep into mainstream motorcycle culture after racers from a wide array of disciplines, including infamous MotoGP riders Marc Marquez and Valentino Rossi, starting practicing flat track as a way to diversify their riding styles. Flat track snuck its way into the Austin X Games last year, and it will return to the Texas city this spring over the same weekend the Moto GP race at Circuit of the Americas and the nearby Handbuilt Motorcycle Show are going on. When the AMA Pro Flat Track season starts back up this year, there will be new sponsors, more manufacturer support, and better bikes.

This sideline sport that’s subsisted for seventy-five odd years will suddenly be trendy, and that means no more events at hotels that smell like fish and piss, fewer couples spilling Bud Light as they scream at each other, and less deep-fried foods. But as the populace piles on, the faithful folk who helped flat track hold onto its place in the world will inevitably feel pressured to abandon the sport they love, but that can’t happen. Flat track’s downhome, grassroots attitude is its most attractive asset.

You can post up against the track wall as bikes go burning by you, and then wander into the pits to chat up racers. You can talk to Bryan Smith and Jared Mees about ice racing on frozen lakes around their hometown of Flint, Michigan, or have a heart-to-heart with Brad Baker after he tells you how nice it is dating a girl whose family also races flat track. You can sit anywhere you’d like in the stands, smoke pot in the parking lot, or strike up a friendly, lighthearted conversation with just about anyone. It’s a carefree motorcycle carnival that should certainly be enjoyed by the masses, but only if the masses can respect the mainstays.

That’s why flat track’s overdue coming of age should be seen as a changing of the guard, not gentrification. The sanctity of the somewhat simpleton sport should remain intact, its growth should be sustainable, and the individuals taking the helm should ensure the diehards stay involved. After the fantastic season finale in Vegas, Sands and the boys started to swill whiskey and shared it with anyone who wanted a pull, including a few of flat track’s longstanding fans wearing Mees shirts. If that kind of camaraderie continues this season and into the next, flat track has a fantastic future ahead.