Graham Rahal Is Gunning For The Indy 500

The Maxim-sponsored driver is on a hot streak. 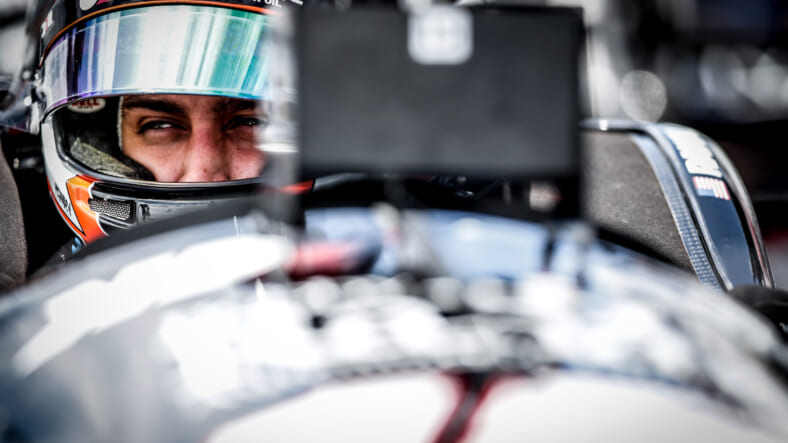 The Maxim-sponsored driver for Rahal Letterman Lanigan Racing—a team co-owned by his father Bobby Rahal, winner of the 1986 Indy 500—had a breakout 2015 season. Autosport magazine even ranked him the top American racer in the world last season.

Rahal has also started out strong in 2016, standing sixth in the championship points even after being taken out by another driver’s mistake at a St. Petersburg, Fla. race where he was running near the front of the field.

Rahal’s visible dissatisfaction with that unlucky collision trended on social media for a while. Now he recognizes that he can only move forward, but notes ruefully, “Those points would have been sweet to have right now.”

The Indianapolis resident scored fourth place in Saturday’s Angie’s List Grand Prix, which takes place on the infield road race course at the Indianapolis Motor Speedway as a bit of a warm-up for the 500’s 2.5-mile oval.

In doing so, Rahal showed winning speed, as he had to drive from a 24-place starting spot after his third-place qualifying time was disallowed because the car was found to be 2 pounds under the minimum allowed weight during technical inspection.

There have been some significant changes for Rahal since last year’s charmed run. Now, he has teammates. That’s because shortly after last season ended, he married fellow second-generation driver, drag racer Courtney Force, who has a unique understanding of the pressures of the job.

“It is different,” Rahal acknowledged to Maxim. “Being married is interesting. The one thing I recognized from the start was that I was no longer just living for myself. Now I’m going out to win for her.”

Which is great motivation, but having a wife who also races creates its own potential for distraction. “It is tough for sure; I worry about her,” said Rahal.

“I want her to be safe.” It is even tougher when they are racing the same weekend and he can’t attend Courtney’s National Hot Rod Association races. “When I’m not there I’m more nervous,” he explained.

And at the track, for the road course Grand Prix of Indianapolis and Memorial Day’s Indy 500 at least, Rahal has a Rahal Letterman Lanigan Racing teammate in Spencer Pigot, who will help the team gather track data twice as quickly so they can zero in on setup changes more effectively.

Contending with big-budget juggernauts like Penske, Andretti and Ganassi can be a challenge for a single-car team like Rahal, but bringing in another car risks diluting the available resources to Rahal’s car and of spoiling the team’s chemistry.

They’ve been careful to ensure that won’t happen with Pigot’s arrival for Indy, according to Rahal. “You don’t want to mess up the mojo everybody’s got going,” he said. “You can just make everything worse.”

To avoid that, the team is truly treating the second car as just that, a second source of data to assist in preparing the first car, Graham’s. “The goal is to get the Steak and Shake car to Victory Lane.”

As if that isn’t always the focus at the Indy 500, this year is the 100 running of the race (It isn’t the 100 anniversary because the first race was held in 1912, but it was cancelled during World War II).

“All we want is a fair shot,” Rahal stated. “It is the race, the only one that matters. The emphasis is placed even bigger on Indy than ever before.”