The 5 Greatest Chevy Suburbans Ever, Ranked

The O.G. SUV has been awesome for over eighty years. 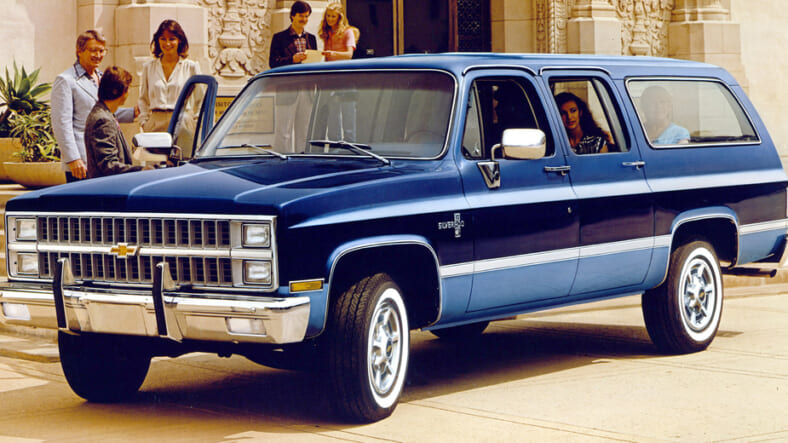 Sure, Jeep lays claim to being the first SUV, but the Chevrolet Suburban was the first SUV to serve as a massive American family hauler, with seating for as many as nine passengers in some versions.

The Suburban has evolved unrecognizably since its debut in 1935. (Yeah, really, 1935.) By the sixties, the Suburban was pretty close in size and concept to a variety of alternative vehicles, such as the Jeep Wagoneer and International Harvester Travelall, which similarly combined utility and passenger capacity.

But in 1973, the Suburban went its own way, with the introduction of a truly gargantuan model that established the mold for the full-size four-door family SUV that continues to this day. When it comes time to pack up the brood for dinner at Grandma’s the Suburban is America’s go-to ride.

With so many versions of this amazing machine over the years, Maxim has decided it is time to rank them.

Duh. Of course the newest one is the best Suburban. Good luck connecting to the 4G wi-fi with the 1935 version! Yeah, the current Suburban’s got that, and just about every other electronic infotainment and safety technology known to man.

Plus, the current Suburban’s styling is a clear return to the crisply boxy lines of the 1973-1992 generation, which is the iconic model.

The Greatest Generation. This creased-and-folded Suburban is the best-looking model in the SUV’s history. It was the first true four-door, with three rows of seats and still abundant cargo space behind the third row.

In additional to van-like side-by-side rear cargo doors, the Suburban could also be ordered with a station wagon-style fold-down rear tailgate with a power window before the advent of the hatchback door on newer Suburbans.

During the five years from 1967 to 1972, the Suburban went through a sort of automotive adolescence, as it grew from the mid-size machine it had been to the muscular monster it would become in 1973.

As part of that, it had an unusual three-door configuration, with front and rear doors on the passenger’s side, and just a single door on the driver’s side. This was also the first generation to offer a heavy-duty three-quarter ton version for towing duty. The Suburban finally knew what it wanted to be when it grew up, it just wasn’t there yet.

During the Swinging Sixties, the Suburban introduced independent front suspension for a smoother ride and four-wheel-drive for all-season security. However, the Chevy SUV remained a bit too bare-bones—the heater was optional—for families to embrace it, so sales totaled a paltry 13,000 Suburbans a year.

If holiday family gatherings teach anything, it is to respect your elders, so we are going to be sure to include the original ’35 ‘Burb on our Top Five list. Because without it, none of the rest of these would even be here.

The eight-passenger wagon’s 207-cubic inch straight six leapt from 60 horsepower in 1935 to 79 horsepower in ’36, setting drivers’ expectations for the Suburban’s ever-increasing muscle over the generations.