The 5 Craziest Cars From the Gumball 3000 Rally

A Batmobile and an F1 car are among the freaky fleet running the 3,000 mile trek. 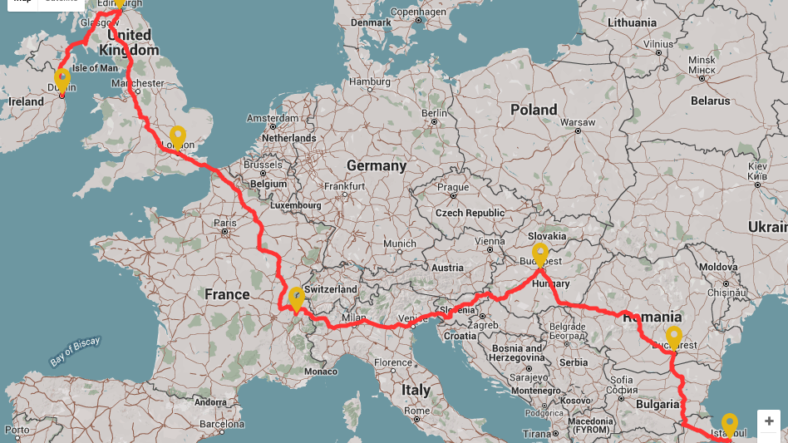 The wild annual car rally known as the Gumball 3000 has officially kicked off its 3,000 mile automotive freakfest. As has been customary in recent years, David Hasselhoff waved off the 90 entrants from the crazy car race’s starting line, as a myriad of mutant vehicles roared off toward Belfast and a ferry to Scotland on their way to Istanbul.

Both Gumball and the rival One Lap of America rally owe their inspiration to the Cannonball Baker Sea-to-Shining Sea Memorial Trophy Dash, a flat-out cross-country race staged by Car & Driver editor Brock Yates in the 1970s to protest the imposition of a national 55 mph speed limit. Gumball 3000 launched back in 1999, and it gets more insane every year.

While One Lap highlights maximum performance, Gumball 3000 is decidedly more hedonistic, with a perverse bent toward exhibitionism. Because anyone can buy an off-the-shelf exotic car, entrants have upped the ante in recent years.

Here, five of our favorites:

This year’s strangest Gumball oddity may be the Saudi team that showed up in a Lamborghini V10-powered, Batmobile-inspired creation that is equal parts military vehicle and endurance racer.

Another driver, who has chosen to remain anonymous, built a purpose-built Formula One-style race car. How it is legal to drive it on the road is anyone’s guess (maybe that’s the reason for the driver’s anonymity), but he’s already made it from Dublin to London.

Briggs Automotive Company wrapped one of its Mono track cars in Gumball 3000-themed gold foil for the occasion, though the company says the car will appear at select cities, so it looks like no one is driving it the whole distance.

Another car not going the distance is the Gumpert Apollo that skidded off a rain-slicked Scottish highway over the weekend. Driver and passenger were both uninjured, which is more than could be said for the car.

The Gumball 3000 concludes May 7 in Instanbul. May the weirdest car win.