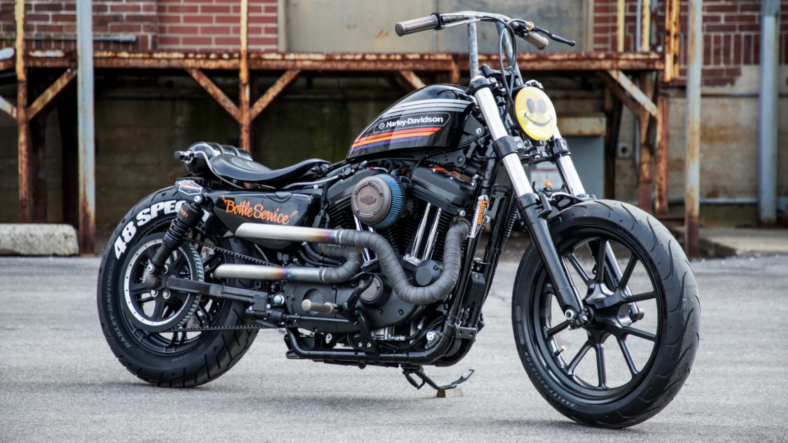 I had never worked on a Harley-Davidson, I’d never turned wrenches on such a tight timeline, and I had certainly never installed a nitrous oxide system on a motorcycle.

In my life I’ve done one custom motorcycle build, which I blindly hobbled through with surprising results, but somehow it felt like this eight-person team looked to me during our two-day build of a Harley-Davidson Forty-Eight Special. I kept saying, “I don’t know what we’re doing.” And everyone just smiled.

About a day after Harley-Davidson debuted its Forty-Eight Special—a chrome-covered Sportster with an Evolution 1200 V-twin engine and a 2.2-gallon “peanut” tank covered in bold horizontal stripes—I flew to Milwaukee to take part in a 48-hour motorcycle build at the local House of Harley dealership as part of Harley’s “Brewtown Throwdown.”

Three other teams would simultaneously customize three other Sportster models at three other dealerships, and all of our bikes would debut at Flat Out Friday, an indoor flat track race that happens on the eve of the annual Mama Tried motorcycle show.

The team was a hodgepodge of media, mechanics, and Harley staff. From the dealership: Travis Caul, Brian Chemrys, Rich Hartnell, and Alex Vogel. Corporate sent along Adam Ames, Harley’s director of accessory portfolio planning, and Joe Gustafson and Sean MacDonald came on behalf of CycleWorld Magazine. Last but not least, the Instafamous Dianna Dalhgren came to get her hands dirty.

A fortnight before the start of Brewtown Throwdown, we hopped on a conference call, discussed the theme for our bobber—a simplified motorcycle with a short tail section—and assembled a parts list that used pieces from Harley’s catalog as well as outside suppliers like Burly, Hella, Thrashin’ Supply, and Zombie Performance.

The dealership mechanics disassembled a fair bit of the motorcycle before the rest of the team arrived in Milwaukee, which is good because we had an overwhelmingly long to-do list.

We kept discussions brief, then dug even further into the bike, pulling off its chrome trim so we could strip it down and paint it black. A substitute front wheel needed to be sandblasted and painted, too. We did away with the turn signals, swapped out the stock headlight with a thin yellow one, and created an integrated LED taillight for the rear fender. I cut off the bulky speedometer and shaped its aluminum bracket with a file.

The new foot controls sat further back, on went a much thinner seat, and the “clown” handlebars were heat-treated for a funky, burnt finish. None of us knew if the nitrous system would actually work; Alex said he’d figure it out, come hell or high water.

The videographers asked how I was feeling about our build. “We’ve got two days. We’ll do a pretty good job in two days, but it ain’t gonna be perfect.” It definitely wasn’t.

The first day flew by in a flurry of spilled oil and paint overspray, and we all watched as Adam painstakingly pasted big, white block letters to the sidewall of the Forty-Eight’s rear tire. When it came time to leave, there were even fewer parts on the bike.

The next morning, we realized the custom exhaust kit we ordered wouldn’t arrive in time, so Brian gathered old tubing from around the shop and tacked a two-into-two exhaust. Gustafson bought race fuel and got the nitrous oxide bottle filled; Alex had figured it out, and Brian riveted leather bottle straps to the top of the rear fender. A painter stopped by to do hand lettering on the side of our bike; “Bottle Service” is what we called it.

The other three bikes were done, en route to the arena for Flat Out Friday. As Travis and I made sure all the electronics were sorted, Sean and Joe filmed Adam wrap the exhaust with fabric heat shield. Then, something went wrong.

Rich tried to spin the rear wheel, but it wouldn’t budge. Momentarily deflated, Rich adjusted a snug-fitting cover on the engine’s bottom end, and then the drive belt broke free and the wheel spun. But then gasoline started leaking from the fuel tank. A bung hadn’t seated, so we didn’t have a seal. Brian broke out plumber’s putty, plugged the leak, and put us back on track. Alex pressed the ignition, and “Bottle Service” came to life.

Alex walked the bike outside, nosed it against a wall, and proceeded to do a magnificent burnout. I got on the bike and did a quick lap through the parking lot, smiling every second. Alex needed to get the bike to the arena as soon as possible, but we obviously had to put it on the dynamometer to see how much horsepower it makes.

Wide-open throttle triggered the nitrous, which failed and sprayed everywhere. We plugged an overlooked line, then did a pull on the dyno that told us very little. We loaded the bike into a trailer, and that’s was that. It was done.

I realized how immersed in the build I’d been. I paid no mind to texts or emails or posts. For two days, I helped realize an overly ambitious vision and build an authentically cool custom motorcycle. (With too many stickers in my opinion, but what’s a team effort without clashing tastes?)

It was well received and looked comfortable on the crowded show floor of Mama Tried. It’s a hyperbolized Harley-Davidson Forty-Eight Special, ridiculous and tasteful at the same time. And It’s got a great smile, too.