The Harley-Davidson ‘Mighty Guerilla’ Is a Beautiful, Blacked-Out Beast 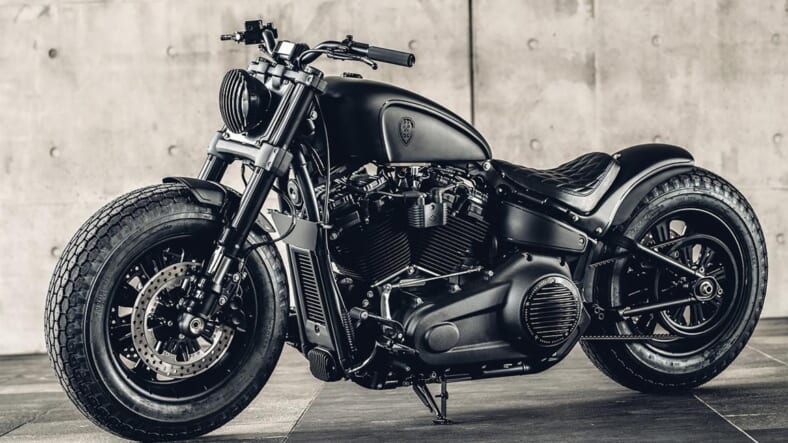 We challenge you to find a more menacing motorcycle than this gorgeous custom Harley-Davidson “Mighty Guerilla.”

The strikingly blacked-out bobber comes courtesy of Rough Crafts’ Winston Yeh—the same custom bike builder who made the Predator-like MV Agusta Brutale 800 RR and a badass roadster based on the Yamaha MT-07.

Yeh’s latest build started life as a 2018 Harley-Davidson Fat Bob 107 before getting his “Guerilla treatment, a signature style he developed nearly a decade ago.

“The goal was clear,” Yeh told Bike EXIF. “I wanted to build the new Guerrilla with the latest platform Harley has to offer, and the Fat Bob was the perfect starting point.”

“Ever since the the first test ride, I fell in love with the new Softail platform. It rides so much better than the previous models Harley made for sure, and the frame makes it easy for customizers to detach things they want to change, without cutting and grinding.”

One of the few things Yeh left alone was the stock 1,750 cc “Milwaukee Eight,” although a new intake and exhaust slightly increase the engine’s output.

As you can see, cosmetic components underwent a total overhaul, including a Sportster-lifted fuselage that was lengthened and narrowed to fit the Fat Bob.

Bike EXIF reports:Up front is a short fender and a custom headlight arrangement. Winston already had a headlight grill for the Sportster Forty-Eight in his catalogue, so he combined a Forty-Eight headlight housing with the LED internals from a Street Bob, and slapped the grill on. It all mounts off a custom backing plate that attaches to the original Fat Bob headlight’s mountings.Out back, Winston designed a new seat, and a rear fender that mounts straight to the Fat Bob’s rear strut mounts. The seat pan and fender were shaped from fiber-glass, using molds that were 3D printed.

Best of all, Yeh plans to sell all of the build parts on Rough Crafts’ online store, so anyone with the right mechanical know-how can transform their Fat Bob 107 into a Mighty Guerilla.