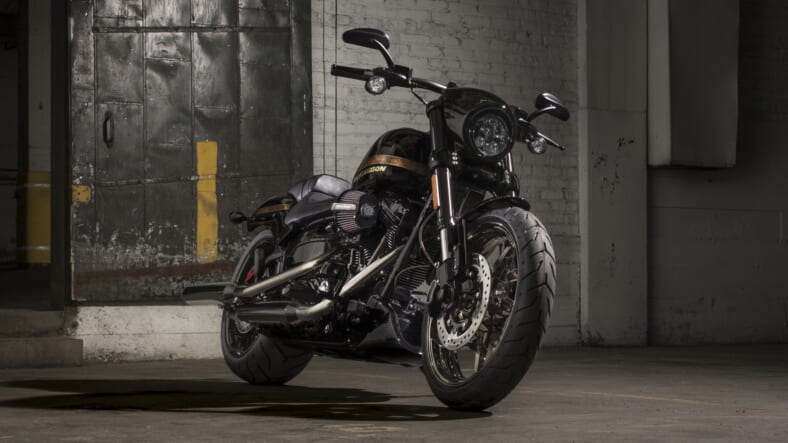 Harley-Davidson hopes to rev up riders with the “sinister” black styling and raw power of their two latest performance bikes, the CVO Pro Street Breakout and  Low Rider S.

The imposingly dark CVO Pro Street Breakout features a new finish that Harley calls “smoke satin chrome” on parts like the exhaust header heat shields and on the bike’s oil lines to create a layered appearance against the bike’s black paint.

“We worked intensely with our plating suppliers to develop the hue and depth of smoke satin chrome, and we are the first to use it in the motorcycle industry,” said Harley-Davidson senior stylist Dais Nagao. “It’s a finish that looks really contemporary and exclusive but also kind of sinister.”

The Pro Street Breakout delivers the performance to back up its gloomy looks, with the company’s Twin Cam 110B, high-performance mufflers and a low-restriction air intake. The bike puts its power to the ground through a fat 240 mm-wide rear tire, and includes standard anti-lock braking to help arrest the resulting speed. It starts at $16,699.

The $25,699 Low Rider S enjoys drag racing-influenced styling, as well as hot-rod parts that boost output of its Twin Cam 110B engine by 13 percent over a standard model. Its 115 lb.-ft. torque is the most of any production Harley, other than CVO models like the Pro Street Breakout.

The two new models comes after Harley’s recent unveiling of the Road Glide Ultra and upgraded versions of its Heritage Softail Classic, Iron and Forty-Eight.