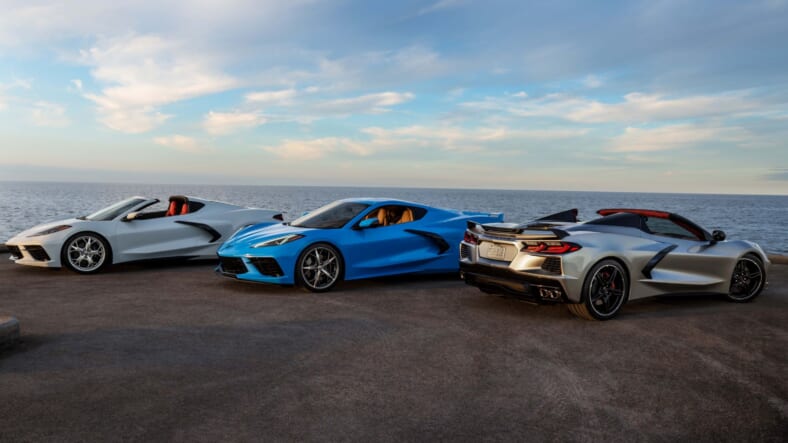 The Chevrolet Corvette’s mid-engine era kicked off with the C8-generation Stingray to widespread acclaim, including Motor Trend’s coveted Car of the Year award and a couple of glowing Maxim reviews in 2020 and 2021.

All GM needed to do was drop the above video of the Stingray’s higher-performance stablemate, the Corvette Z06, running hot laps to fire up the hype train’s pistons again.

Car and Driver, which has been carefully watching for all things Z06, reports that the supercar scream heard here is coming from a 5.5-liter flat-plane-crank V8 with over 600 horsepower.

That configuration is particularly notable because it allows for a higher, Ferrari V8-rivaling redline—between 8,500 and 9,000 rpm. The current Stingray’s lower-pitched growl is emitted from a cross-plane V8, for comparison’s sake.

More concrete details will be available when the 2023 Corvette Z06 is fully unveiled later this year, but C&D has already spotted camouflaged prototypes with aggressive aero packages including a giant rear wing, as well as both center-exit and quad-tip exhausts.

And the Z06 will only reign as the most powerful C8 Corvette in the interim, until the next-gen turbocharged ZR1 arrives with 850 horsepower in 2024.

But the most powerful C8 ‘Vette will be the all-new hybrid Zora, due out in 2025 a rumored 1,000 horsepower and 975 pound-feet of torque, according to Car and Driver.

Needless to say it’s an exciting time to be a Corvette fan.