Imagine how fast you could cut your grass in this superbike-powered lawnmower. 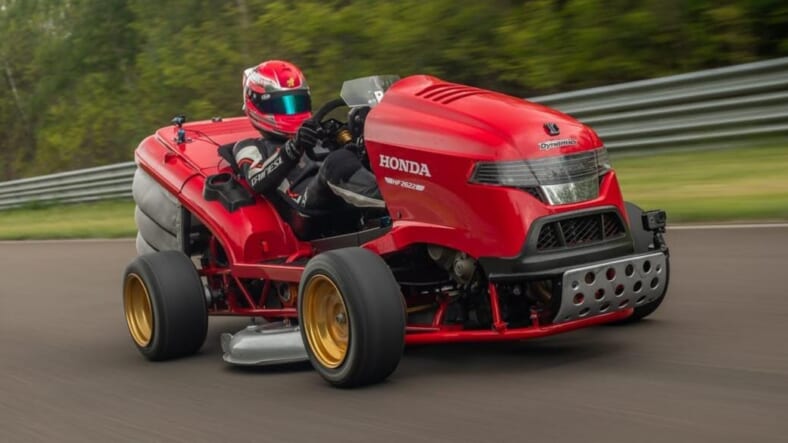 Honda’s absurdly fast “Mean Mower V2” just smashed another very important record with a performance that rivals that of most supercars.

The latest rendition of the Japanese automaker’s motorcycle-powered, ride-on grass shredder hit 100 mph in just under 6.29 seconds at Germany’s Lausitzring, setting the Guinness World Record for the “Fastest Acceleration 0-100 mph for a Lawnmower.”

The official figure is an average of two run times completed in opposite directions within the same hour.

Stunt driver Jess Hawkins expertly controlled the heavily-modified Honda HF 2622 Garden Tractor, which boasts a 190-horsepower four-cylinder from a Honda Fireblade superbike. Flat out, it’ll hit an absurd 150 mph—way faster than the Mean Mower V1 that achieved a 116 mph top speed back in 2013.

As we reported when the Mean Mower V2 was unveiled last summer, it also has the Fireblade’s clutch, ECU, drive train and full-color LCD display.

And yes, it still can cut grass courtesy of battery-powered carbon fiber blades. But it also has a higher power-to-weight ratio than the Bugatti Chiron, according to CNET’s Roadshow.