We hit the road with the muscled-up Indian Scout Sixty. 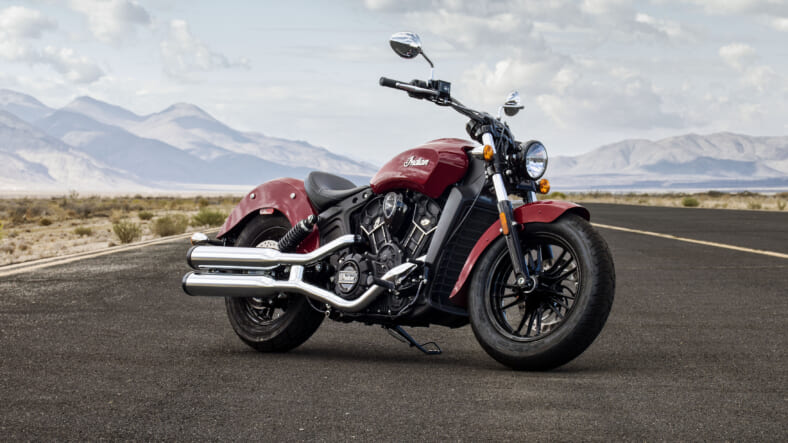 Indian Motorcycle Manufacturing Co. opened its doors in Springfield, Mass. in 1901, two years before Harley-Davidson launched in Milwaukee. For a half-century, the two American motorcycle titans battled, before Indian collapsed in 1953.

Indian’s failure left Harley-Davidson and its enthusiast to dictate the terms of American motorcycling for more than another half-century: a narrow-angle V-twin, the rougher, the better.

The $8,999, 1,000-cubic centimeter (or 60-cubic inches, hence the name) 2016 Indian Scout Sixty is the product of a revived Indian brand, reconstituted by the Polaris snowmobile people to reinforce their mostly overlooked home-grown Victory brand.

The Scout 60 is a smaller, less expensive version of the Scout we tested last year. It doesn’t directly align against a particular Harley model. Instead, it falls between the modern water-cooled Street 750 and the traditional air-cooled Sportster 1200.

Philosophically, the slick-running, water-cooled Scout is closer to Harley’s Street line of bikes, which eschew the traditional Harley embrace of noise and vibration.

But the Scout has a bigger, stronger 78-horsepower engine than Harley’s entry-level machines, though the prices align closely. It has none of the sputtering, bucking histrionics of the Sportster, but Harley fans would say it also lacks that bike’s charisma as a result.

This is the result of Harley’s domination of the market. The company and its fans have decided what an American bike should be. The question is whether Indian, and Harley’s own Street models, have an say in the matter. It is surely no less American to enjoy the Scout’s smooth refinement and abundant power than it is to willingly suffer the Sportster’s lack of those qualities.

All of the Scout’s controls feature light action, smooth movement and precise response to input, making the bike steer more accurately than most cruisers and making its throttle, brakes and switches all more effortless to use. The engine is impressively quiet, aside from a high-pitched whirring sound reminiscent of old Honda 750s camshaft whirling noise.

The Scout’s effortless shifter makes running the bike up and down through the gears a joy, without the notchiness of the Street’s gearbox or the seeming inertia of clunky internal parts evident in so many V-twin cruisers. As in so many other respects, the Scout resets expectations

The Scout also looks better than the Street 750 we rode previously. The lines seem more continuous and of-a-piece, and the radiator providing the engine’s water cooling seems better integrated into the Scout’s styling.

The Scout leans easily into curves, but the forward-mounted footpegs seem to skim the pavement even when making moderate turns. But their position is probably necessary because of the astonishingly low 25.3-inch seat height, which forces the footpegs down and forward in search of legroom.

The short-statured will appreciate the ability to reach the ground from the seat, though, and everyone can enjoy the benefits of the low-slung Scout’s low center of gravity, for nimble handling. However, the single seat leaves no room to reposition, leading to early onset of rear end pain astride the Scout.

There is an optional $199 seat, but the stock bike’s rear springs seem intended to handle the additional weight of a passenger cantilevered out over the rear wheel. That makes it excessively stiff for a single rider, and the shortage of shock absorber damping lets the rear end pogo over bumps. This is easily addressed in the aftermarket, but would be better solved at the factory.

The bounciness of the Scout’s rear is the sole imperfection though. This bike is smooth, quiet and powerful, the two-wheeled embodiment of classic American luxury, without the absurd mass of ungainly heavyweight cruisers. Consider it muscle under a suit jacket rather than exposed in a sleeveless tee.

The Scout makes a welcome argument for an adjustment to the definition of what an American cruiser can be. We look forward to its success.