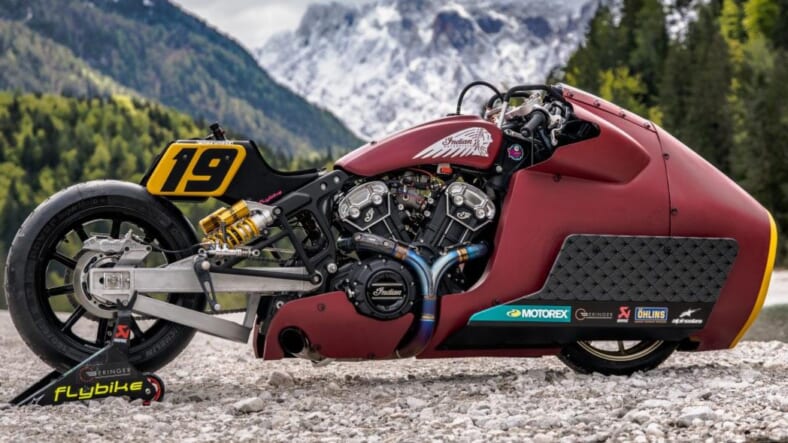 Indian is celebrating the Scout’s centennial with an absurdly powerful custom bike that’s as fast—if not faster—than it looks.

He came back with a monster dubbed the “Appaloosa,” named after the famous breed of horses. Starting with the Scout’s 1200cc engine, Hennebert upped the output from 100 to 130 horsepower by installing high-performance components like an Akrapovič exhaust, a direct intake, a nitrous oxide injection system, and growling titanium exhaust.

To handle all of that juice, he also converted the stock belt drive to a chain drive with a quickshifter for precise gear changes.

An entirely new sub-frame was constructed around a sprint-spec aluminum fuel cell to ensure the rider is optimally positioned and supported under hard acceleration.

And those are just some of the modifications Hennebert made over the 700-hour project.

Just the aluminum bodywork alone took Brice seven weeks to shape. It’s dominated by a massive front fairing, which takes inspiration from 1920s trains, 1940s Formula One cars, and the legendary F-86 Sabre fighter jet. And the tail section is a nod to 80s GP two-strokes.There’s a heck of a lot of detail to take in. Brice has used quarter-turn fasteners throughout, so that bits of the fairing can come off quickly for maintenance. The fairing bracket is custom too, and consists of two parts (the lower bit gets removed when the bike goes on the dyno).Stopping the beast after each sprint is a complete Beringer 4D Aerotec braking system. It’s a setup that uses two discs per caliper, for maximum grip and reduced inertia (yes, you read right).

Indian obviously needed a seasoned rider to pilot the Appaloosa, and they didn’t exactly settle. MotoGP legend Randy Mamola will race it in Sultans of Sprint Championship events throughout France and Germany this summer.

What we’d give to see it in action