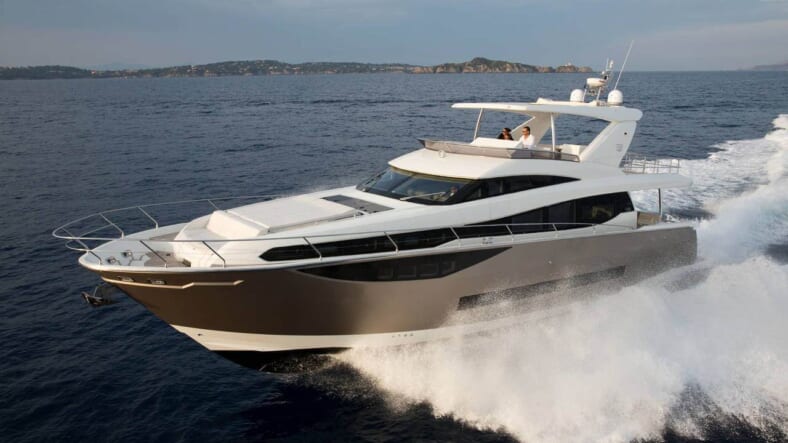 UFC superstar Conor McGregor has a new toy to play with during his just-announced six-month suspension from the Nevada Athletic Commission: a custom-built 75-ft. luxury yacht which cost $3.4 million before options.

The Notorious posted an Instagram video of himself flicking through the brochure for the new yacht, which is inscribed with quotes such as this gem from Muhammad Ali: “He who is not courageous enough to take risks will accomplish nothing in life.”

The cost of the craft is mere pocket change for the Irish sensation, whose net worth is estimated at about $100 million, according to Forbes.

The Prestige 750, as the yacht is known, “combines French savoir-faire, cutting-edge technology, Italian aesthetics and unique design features,” according to Yacht Harbour.

The Garroni design firm and Prestige Yachts’ design department conceived of the 75-foot motor yacht to “upend traditional design codes, offering an outstanding level of comfort and a contemporary design.”

The open cockpit yacht has multiple living spaces both on deck and below, highlighted by a large terrace on the flybridge. The light-filled forward owner’s cabin has a large walk-in closet, a desk, and an en-suite bathroom. It’s capable of a top speed of 28 knots and a cruising speed of 24 knots and is Prestige Yachts’ largest flybridge model.

It’s unclear whether McGregor will keep the smaller sport yacht he bought in 2017 and named The 188, referring to the amount of social welfare he used to receive before fame and fortune came his way.

But the name “Prestige” for anything nautical can’t help but conjure fond memories of Prestige Worldwide’s “Boats ‘n Hoes” video from Step Brothers. So there’s that.

Anyways, if you’re out on the water and see The Notorious One coming toward you in either of his badass boats, best to get the hell outta the way.