“It’s more than a speed boat, it’s a lifestyle.” 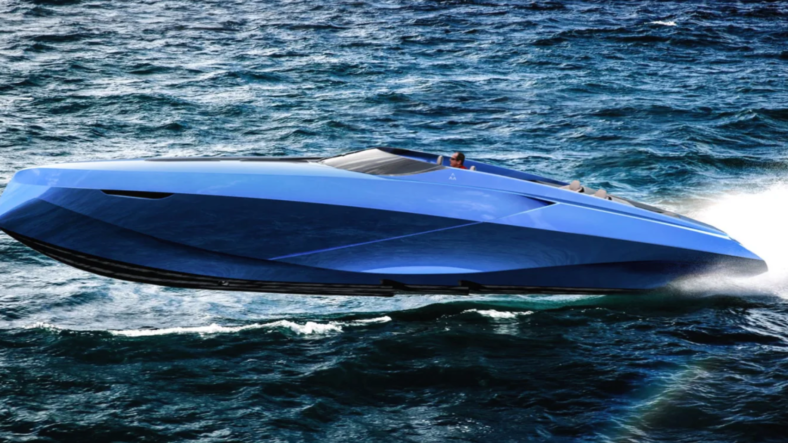 With a maximum speed of 80-plus knots (over 90 mph) and a cruising speed of 50-plus knots or almost 60 miles per hour, yacht designers Officina Armare‘s new Lambo-inspired day cruiser could be one of the most badass rides on the water.

As planned, it rocks a pair of 540 horsepower Mercury engines. Add to that a durable but lightweight carbon fiber construction and it’s a candidate for James Bond‘s personal yacht garage (you know he has one somewhere).

This luxe concept also sports a shimmery blue paint job, but more interesting still is the cabin. For a speed demon like this the proposed amenities are surprisingly down-to-earth.

Those include an in-cabin bathroom and shower, a kitchen, dining table, and of course a living area.

Officina Armare elaborates on this design, which it has simply dubbed A43:

The idea behind the A43 concept is combining a traditional speedboat with the sleek, strong characteristics and high performance that you would expect from a modern supercar.

As a result the whole concept was inspired by the Lamborghini cars since they are one of the most revolutionary, unique and timeless supercar [manufacturers] in the world.

The company says the A43 is “more than a speed boat, it’s a lifestyle.”

Of course these are just realistic renders. The actual boat doesn’t exist in the real world yet. But anyone who feels ready for this kind of lifestyle change can get in touch with Officina Armare here.