Salute 150 years of Jack and a worthy cause with a sweet limited-edition bike. 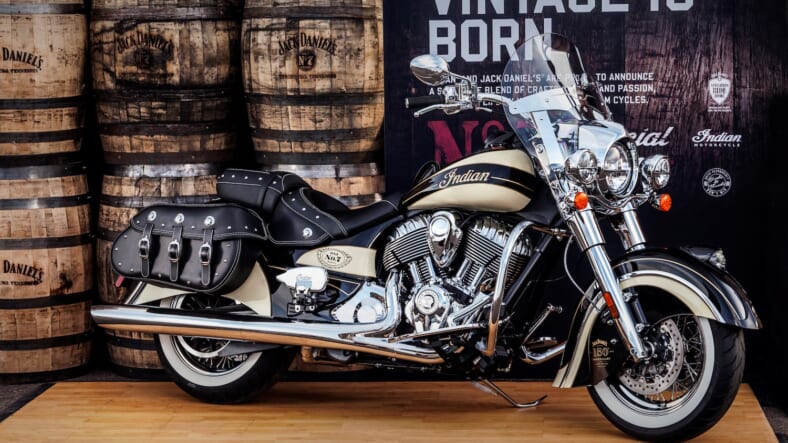 Not everyone may love the vintage styling of the Indian Chief, though the classic bike built by America’s first motorcycle company was ridden by Steve McQueen, among other cool cats. But no one can argue the merits of the brand’s new partnership with another American icon, Jack Daniel’s. The Limited Edition Jack Daniel’s Indian Chief Vintage bike commemorates the 150th anniversary of Jack Daniel’s, which was established in 1866.

Among other gewgaws, the branded bike has a Jack Daniel’s-inspired custom paint job and logos, badging, a leather saddle and saddlebags. The fender is inscribed with the names of the seven Master Distillers who have made the All-American tipple in Tennessee over the past 150 years. Sure, the bike is a bit of a rolling booze ad, but there are certainly plenty of fans of the world’s best-selling whiskey, including musical legends Lemmy Kilmister, Frank Sinatra, and the still-with-us Keith Richards.

Displayed at this week’s Barrett-Jackson Scottsdale Collector Car Auction in Arizona, the very first example to be built will appear at a series of events throughout 2016, including Daytona Bike Week in March, at which time full production details will be revealed. And then come October, the display model will be auctioned by Barrett-Jackson in Las Vegas on October 6-8.

All the cash it brings in will go to “Operation Ride Home,” a partnership between the Jack Daniel’s and the Armed Services YMCA that provides funding and travel assistance to help young enlisted military personnel spend time with their families during the holiday season—whatever they choose to drink.

And speaking of, the bike bears the inscription “Bottles and Throttles Don’t Mix” – just in case you were getting the wrong idea here….