Meet the new cat on the block. 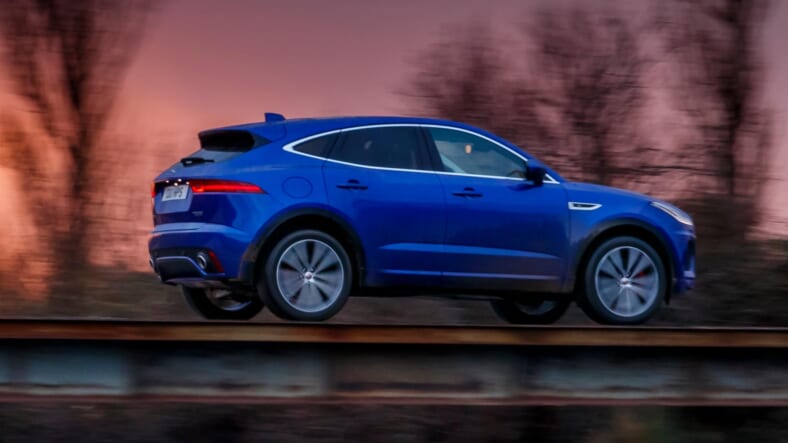 The chestnut is the national fruit of Corsica. They use it to make bread, beer, cake and pretty much any other food you can think of. The golf clubhouse where we dined during the media launch of Jaguar’s E-Pace crossover SUV featured exposed beams made of wood from chestnut trees. Everything in Corsica is flavored with chestnut and we can report that the soup is delicious.

So it is at Jaguar, a car company whose identity was forged in the grueling 24-hour sports car races at Le Mans. Jaguar tries to flavor all of its vehicles with a taste of the F-Type, its current interpretation of the brand’s classic sports cars of yore. And like chestnut soup, the result is surprisingly successful.

In terms of aesthetics, at least. The E-Pace is visibly compact, making it immediately discernible from the F-Pace we met last year. But while the E-Pace is shorter, it preserves the width that is a hallmark of sports cars, providing an aggressive stance.

And around back, the rear fenders include a crease that flows into the taillights that instantly recalls the F-Type sports car. Of course the roof stands taller on this crossover than on the F-Type, but the E-Pace’s top swoops downward toward the rear, ending in a backwards ball cap of a spoiler that underscores the car’s attitude.

The E-Pace is built on parts shared with the Land Rover Discovery Sport and the Velar that we tested in the snow of North Carolina’s Biltmore Inn. But the Jaguar debuts a new engine for Jaguar. The ‘Ingenium’ 2.0-liter turbocharged four-cylinder engine comes in either 246-horsepower or 296-horsepower versions, and it provides more power and better efficiency than Jaguar-Land Rover’s outgoing equivalent engine.

It is matched to a nine-speed transmission that always has the ideal ratio for the situation. However, even driving in Dynamic mode, it seemed slow to downshift and throttle response seemed sluggish for a Jaguar. The rear-drive-biased F-Pace’s transmission proved adept at downshifting as we braked approaching corners or when we matted the accelerator departing curves during our introductory drive in Montenegro, so the E-Pace’s comparative pokiness was unexpected.

Using the steering wheel-mounted shift paddles solves that problem, but the E-Pace also responds to the helm in a tardy fashion while attacking Corsica’s endless mountain switchbacks. Neither shortcoming, the downshifts or the steering response, will ever be evident in normal driving. But the extreme conditions of the Mediterranean test drive made the E-Pace’s front-wheel drive foundation evident when compared to Jaguar’s rear-drive-focused models.

The E-Pace borrows off-roading hardware from Land Rover, so it easily handled the rock scrambles we traversed during the drive and forded streams without drama.

The compact Jag’s cabin is appropriately appointed, at least when equipped with the lovely Light Oyster leather upholstery and panoramic skylight of the Caesium Blue test car.

And here is where the E-Pace separates itself from Jaguar’s sleek two-seaters: drivers can actually use it for practical everyday life, thanks to rear seats that are not only comfortable for adult passengers, but which also fold to aid in retrieving purchases.

If sports car partisans challenge your decision to buy an E-Pace, ask them that any performance comparisons between it and their sports cars be conducted while hauling home a chestnut dresser and a case of Corsica’s Pietra chestnut beer.