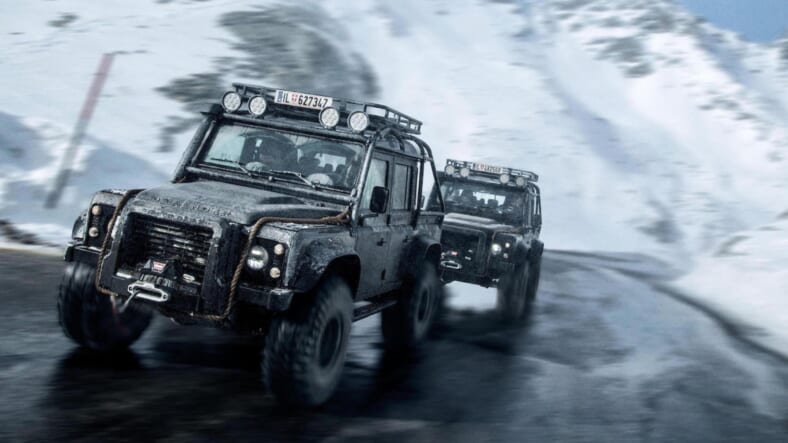 Ready to channel your inner 007?

One of the surviving Land Rover Defenders used in the James Bond film Spectre is headed to the Bonhams auction block with an expected sale price of $290,000 to $330,000.

Another of the ten sold last year at RM Sotheby’s for $305,000. (These are not to be confused with the replicas we’ve previously told you about.)

Here’s more info from the listing:

Unlike most of the other Spectres, which were used only for publicity purposes or not at all, this example was used extensively in the filming and still has marks on its bonnet left by the stuntmen. Unusually, it retains its mechanical handbrake and ‘SVX’ boot badges (most of the other vehicles had theirs removed) and also key tags identifying it as an official film car, etc. The first private owner had the pick of all ten Spectre Defenders and chose this one as it is the most significant.

Representing a possibly once-in-a-lifetime opportunity to acquire one of the most memorable’ Bond’ vehicles of recent times, this imposing Spectre Defender if offered with the owner’s wallet containing the handbook and (blank) service booklet; current MoT certificate; UK V5C document for the most appropriate registration ‘OO07 SVX’; and a framed presentation featuring movie stills, the shooting schedule, and an Austrian licence plate.

The truck’s suspension was rebuilt using racing hardware in place of the regular street parts, including Bilstein racing shocks.

The cabin is reinforced with a full roll cage that protected the stunt drivers in the SVXs that were casualties of filming, and the drivers were held in place by Recaro race seats and four-point racing harnesses.

The Defender’s 2.2-liter diesel engine is upgraded to 185 horsepower (from the stock 120 horsepower) and 368 lb.-ft. of torque to aid in persecuting Bond on sinuous Alpine roads.

This particular SVX is reported to bear the scars on its hood left by the stunt men as evidence of its role in the movie.

The first Land Rover Defender was built in 1948, and over the decades until production ceased in 2016, it became as much an English icon as the fictional super spy, 007.

As with Bond, with the character’s rotating cast of actors, the Defender has also changed over the years, evolving from the original Series I, Series II and Series III, before settling on just the familiar “Defender” nameplate.

The Defender was also available in two versions, the stubby, Jeep-like “90,” named for its short 90-inch wheelbase, and the longer, truck-like “110,” with its additional 20 inches between the axles.

Land Rover promises a new edition of the Defender soon. Unlike the new Mercedes G-Wagen, however, Land Rover says the new version of its iconic classic will be more forward-looking and contemporary, rather than retaining familiar styling atop updated running gear.