Give Keanu props for doing his own driving. 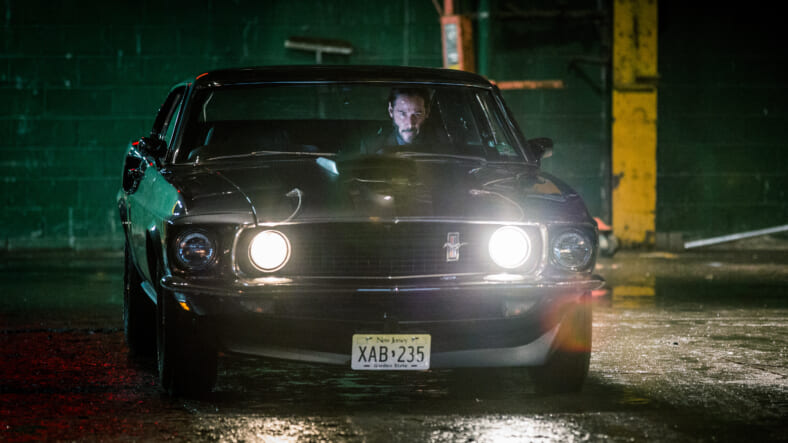 Pencil-wielding assassin John Wick is back in John Wick: Chapter 2, and so is Wick’s wicked black 1969 Mustang, and their renewed collaboration required preparation, according to Keanu Reeves in an Associated Press story.

The film crew not only built, and sadly destroyed, five of the classic pony cars while shooting the film, Reeves himself underwent extensive driver training that allowed him to participate in some of the mayhem and destruction rather than relying entirely on stunt drivers.

“In the second [film], they actually let me be in a car and drive into another car,” Reeves told the AP. “I was surprised about that. They said, ‘Get in the car, drive backward and smash into that other car.’ It was funny because I hit that car so hard, I ripped the steering wheel off the steering column.”

The training for the sequel amounted to a refresher course on familiar material, Reeves said in the film’s promotional featurette. “The car stuff came back pretty quick,” he said. “I threw some 90s, some 180s.”

For most of the scenes, however, the crew relied on the driving talents of Reeves’ stunt double to perform what stunt director Darrin Prescott calls “car fu,” when the car is used as a weapon.

The 1969 Mustang is a formidable partner for Reeves’ Wick character thanks to impressive specifications from the factory. A big-block car like Wick’s, which isn’t a collectible Boss 429, would feature either a 320-horsepower 390 cubic-inch engine or a 335-horsepower 428.

Of course that was when it left the factory. You’ve gotta figure a professional assassin has fortified his gorgeous black steed with still more power thanks to custom modifications. Bet he needed more than a pencil to do it with, though.