Red Bull Gave Me My Acrobatic Flying Wings, and I Lived to Tell About It

One writer’s airborne ride of a lifetime. 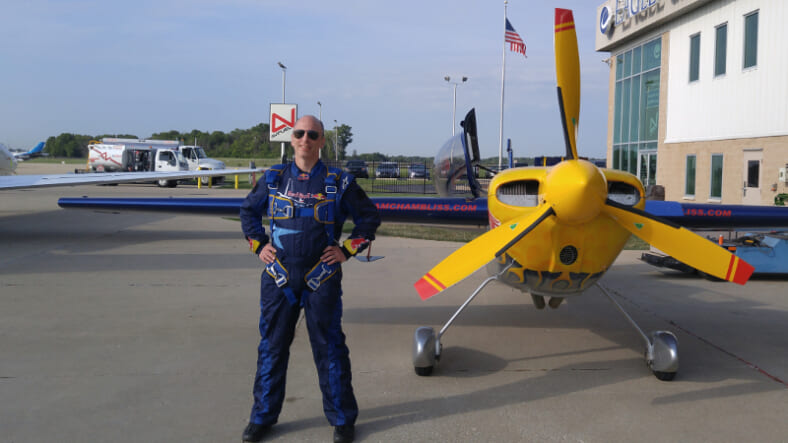 As I was being escorted to Eagle Creek Airport just outside of Indianapolis the other morning, I couldn’t help but wonder how much my commercial plane ride home was gonna suck.Quick rewind…After writing about one of their race pilots performing a high-speed wind farm slalom, Red Bull invited me to experience aerobatic flying for myself. So they flew me to Indianapolis, where this year’s Red Bull Air Race makes its North American debut in October.I figured after all the barrel rolls I knew we’d do, I was either going to feel too woozy to want to step onto another plane later that day or overly bored with how uneventful that return flight was sure to be.

With world champion aerobatic pilot Kirby Chambliss at the stick, we took to the sky and did moves that most passengers, pilots and planes never do. Beyond the standard barrel rolls, going straight up and straight down, we also did flat spins, 270s, and flipped end-over-end three times in a row.The affable Chambliss wanted to make sure I had a fun ride, but didn’t overdo it. So throughout the (at least for me) head-bobbing maneuvers, we “only” maxed out at six Gs. I have a new appreciation for what that means, especially knowing that in actual race situations, pilots are allowed to pull up to 10 Gs—but only for six tenths of a second.The below video, captured with a GoPro mounted on the tail, will give you a rough idea of what it was like:

After a quick and smooth landing, I emerged from the cockpit a little dizzy and wobbly, but I regained my land legs after chilling out with a drink of water and in some air conditioning.Although to me it had felt like a combination of the worst turbulence and most extreme roller coaster I’d ever experienced, Chambliss jokingly referred to the plane we flew in as “the family truckster,” as opposed to the super-streamlined and race-optimized Zivko Edge 540 single-seater he uses in competitions around the world.At the end of the day, the A319 I flew back to New York in might as well have been a jumbo jet. Aside from being predictably larger, steadier and smoother, it was a delightfully tame way to end my 24-hour air trip of a lifetime.