The radical flying car prototype successfully flew to an altitude of 1,500 feet. 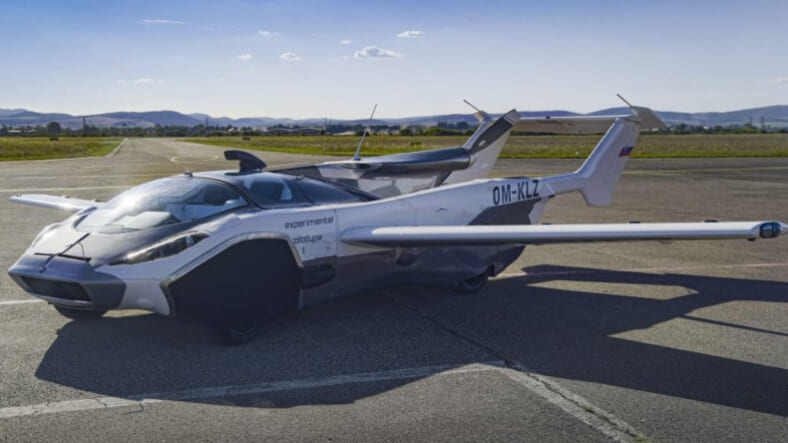 The concept of a flying car is officially no longer a futuristic prospect, as the Klein Vision’s AirCar V5 has successfully performed two full take off and landing airport patterns—watch the radical vehicle take its maiden voyage above.

The road car/aircraft was piloted by company founder and CEO Stefan Klein, a former Audi and BMW designer who previously worked on earlier iterations of the AeroMobil 3.0 before leaving the Slovakian company to pursue this project.

While Japan’s SkyDrive Electric Vertical Takeoff and Landing (eVTOL) recently made news after hovering several feet off of the ground for a matter of minutes, the AirCar V5’s demonstration saw it climb to a comparatively high altitude of 1,500 feet and actually maneuver like a plane.

In-flight capability is one thing, but Klein Vision has also designed the AirCar to be practical for anyone. The company claims the “stability and controllability of the AirCar is accessible to any pilot.” It also can be transformed from car to aircraft and vice-versa in three minutes at the click of a button.

“With Aircar you will arrive at your destination without the hassle of getting a ride to airport and passing through commercial security, you can drive your AirCar to the golf course, the office, the mall or your hotel and park it in a normal parking space,” said Anton Zajac, Klein Vision’s co-founder, investor and pilot.

While the retractable wings and general architecture make the AirCar look large in comparison to a daily driver, it’s actually on the lighter side of 2,500 pounds—less than a Toyota Corolla. That low weight allows for a small power plant—a 140-hp, BMW-sourced 1.6-liter four-cylinder that’s capable of propelling the AirCar to 124 mph. Range is estimated to be around 620 miles.

Those specs are subject to change, as Klein Vision’s next task is to develop a more powerful AirCar.

“The key flight parameters confirmed all theoretical concepts and calculations that the development of the AirCar was based on. Following the completion of all required flight tests in compliance with EASA regulations, we will deliver a model with a certified ADEPT, 300HP engine within the next 6 next months” said Klein. “The good news is, we already have a buyer.”