This Stunning Superyacht Concept Is A Floating Paradise

The 282-foot Komorebi trimaran is basically a giant wet dream. 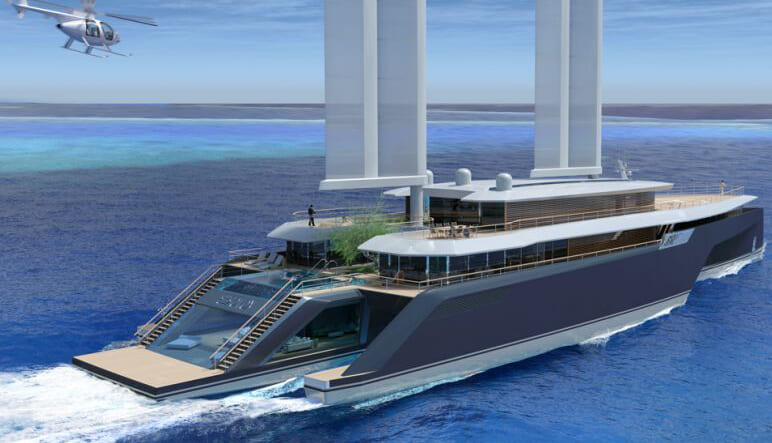 Just as you wouldn’t buy a Bugatti for its fuel efficiency, you wouldn’t invest in a palatial superyacht for its speed. After all, it’s an escape, a safe place to decompress and celebrate your independence. That’s what VPLP’s 282-foot trimaran superyacht concept is all about.Named for the inspirational Japanese concept of how nature’s inner beauty shines as sunbeams penetrate a tree’s leaves, the Komorebi embodies a certain sophisticated balance. Yes, it’s big enough to land a helicopter on the front deck, house myriad water toys in its trio of hulls and encompass plenty of decadent lounging areas throughout. But as sprawling and open as it is, the ship still somehow manages to conjure a sense of intimacy and simplicity.

Even beyond its counterintuitively friendly, unintimidating demeanor, this giant vessel’s got smarts. With a 20-knot wind, its fully automated “wings” are able to drive it at 15 knots, without any engine assistance. They estimate this hybrid propulsion mode could save at least 30 percent on fuel over long distances.

So it’s the ultimate getaway, both as a destination itself and a means to a journey. If you’ve got weeks to spare, it’s got the range. And if you’ve got the desire to rebalance and rejuvenate by reconnecting with friends and nature, the Komorebi offers that certain—what do the Japanese say?—je ne sais quoi as well.