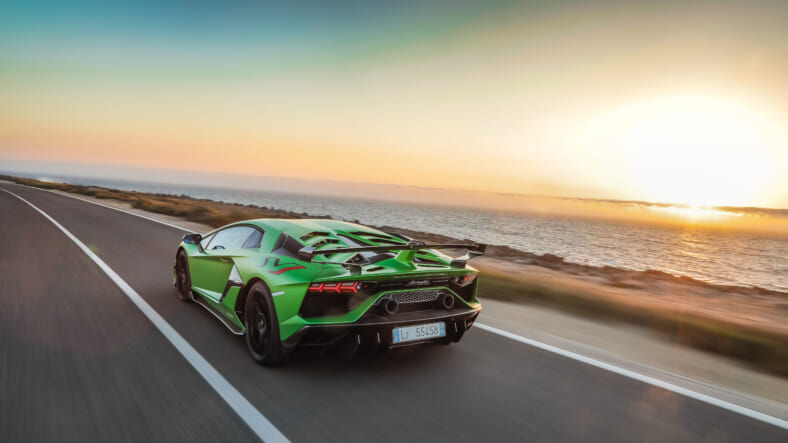 There’s an adage that about the hulking Vietnam-era McDonnell-Douglas F-4 Phantom fighter jet that says the plane is proof that given enough thrust, even a brick can fly.

The $517,770 2019 Lamborghini Aventador Super Veloce Jota might embody the flip side of that adage, that given enough aerodynamic assistance, even a zoomy V12-powered Italian wedge can turn corners.

It has proved it too, ripping through the 172 corners of the 14.2-mile Nurburgring circuit in 6:44.97, which is a record for a production car. It accomplished this with the invisible aid of the second generation of Lamborghini’s active aerodynamics system, Aerodinamica Lamborghini Attiva, which we first experienced with last year’s Huracan Performante.

Lamborghini has been associated with overt aerodynamics since an eye-poppingly huge wing erupted on the sloping rear deck of the Countach in the 1970s and an Alpine stereo poster of a red example of the Italian flying saucer decorated the bedrooms of teenagers across the country.

But ALA works invisibly. Sure, there is a large, fixed rear wing on the SVJ (that’s a designation taken from the ‘60s classic Miura SVJ) but that is the expectation for modern track editions of high-performance cars.

What isn’t the expectation is that the wing is hollow, with channels to blast air out its underside that can reduce the wing’s drag when driving in a straight line, just like the Drag Reduction System on a Formula 1 car.

More ingeniously, it can douse the downforce on the outer side of the car in corners, pressing only on the inside to help maintain an even keel. Plus, there’s a huge diffuser under the rear end that also helps stick the SVJ to the pavement and a front diffuser built into the splitter under the car’s bumper whose 20 mm of rise creates a tunnel in the air to stick the front tires in turns.

It works too, as head of vehicle dynamics for Lamborghini, Lorenzo Rinaldi, described working through prototypes with no front undertray, with a flat one and one with a 10mm rise before settling on the 20mm production specification.

Those earlier prototypes understeered in fast corners, sliding the front tires and causing the Aventador to miss the turn’s apex.

No more. Now ALA 2.0 flies the SVJ around the track like a grounded fighter plane, as we experienced piloting the Italian beauty around the Estoril grand prix circuit near Lisbon, Portugal.

The aerodynamic upgrade, along with a rear-wheel steering system and stiffer anti-roll bars and shock absorbers have also contributed to reducing the Aventador’s previous tendency toward understeer to produce a car that handles like its styling suggests it would.

Of course, the Aventador’s 770-horsepower naturally aspirated V12 engine has no trouble cashing the checks the SVJ’s styling is writing. In addition to the engine’s sublime note, the user-friendly linear power delivery builds predictably to give the driver maximum confidence when flooring the throttle as the corner exit comes into view.

Be assured, “linear” isn’t some kind of euphemism for “underpowered.” Those are 770 real horses in the SVJ’s stable, and they push the car to 60 mph in 2.7 seconds and to a top speed of more than 217 mph.

That’s the kind of thrust that makes F-4s fly, and in the SVJ it shortens the straights on racetracks as the car vaults down the pavement with astonishing urgency. Even braking early for the onrushing Turn 1, the SVJ reached the same 175 mph on Estoril’s front straight, as the million-dollar McLaren Senna did during our test there of that car in June.

The track has been freshly repaved since the Senna drive and it is now oily and slick with new asphalt that costs about 20 percent of the road-holding grip that was possible before. So the SVJ isn’t exiting the final turn onto the straight with as much as much speed as it would have, so it would otherwise be faster than the Senna.

There is a shortcoming, unfortunately, in this stunning piece of automotive artwork, and that is the brakes. Festivities have inertia, as every party host who has struggled to eject guests at the end of the night well knows.

When a car generates the speed the Aventador SVJ does, and it carries the abundant mass of an all-wheel-drive V12 that stretches 195 inches long, that’s a big bash to wind down. And the SVJ’s massive brakes just aren’t up to the job.

The car’s carbon ceramic disc brakes are commendably free of the abrupt grabbiness and squeal we experienced in the Ferrari 488 Pista. But as we learned from the McLaren 600LT, there is a lot that can be done in matching the master cylinder to the job and applying optimum power assistance.

The Aventador hunts around disconcertingly when braking at the limit, seeming interested in trying the lanes to the left and right before you can wrestle it back in line. While that is happening, the pedal keeps oozing toward the floor, further sapping confidence in the SVJ’s ability to shed the speed it generates so delightfully.

We noticed the same issue with the Huracan Performante when testing it at the Imola grand prix track last year, so it seems like Lamborghini test drivers are more courageous than the rest of us.

The company insists that long-travel brake pedal action is part of an intentional strategy to make its cars easy to live with in street driving, in contrast to Ferrari’s example. But McLaren has shown that this is no binary choice, and that it is possible to have both stable, powerful stopping force and a tolerable response in everyday driving situations.

However this is the sole flaw in Lamborghini’s latest dream machine. So drive with a little reserve in mind when stopping from high speeds and the Aventador SVJ will absolutely deliver the brio and speed promised by the Lamborghini name and the Aventador’s swoopy looks.

Alpine has its new poster car.