Are The Lamborghini Huracan Spyder And The Porsche 911 Turbo S Really Exactly Equal?

That was the verdict in a recent “car of the year” competition. 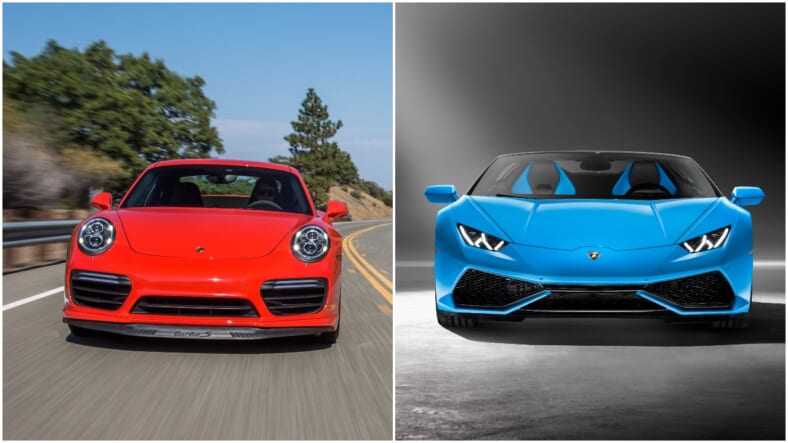 So, whose NCAA basketball bracket has the two teams in the championship game tying for the national championship? You know, where each gets to cut down one net and take that one home, as a co-champion.

No way, right? Well, that’s what happened at luxury mag Robb Report‘s 15th annual car of the year competition, when voters like noted car professional John Elway said it was a tie between the Porsche 911 Turbo S and the Lamborghini Huracan LP 610-4 Spyder.

OK, we kid. John Elway is actually the owner of a chain of Colorado car dealers, so we’ll give him some cred to make these decisions along with the likes of style master John Varvatos and other Robb Report-select car enthusiasts.

But still, when you’re able to sift through a roster of incredible luxury machines that includes the Audi R8 V10 Plus, Bentley Bentayga, BMW Alpina B7 xDrive, Cadillac CT6 Platinum 3.0TT AWD, Jaguar F-Type SVR Coupe, Lincoln Continental Black Label, McLaren 570GT, Mercedes-AMG S63 Cabriolet, Nissan GT-R, and Rolls-Royce Dawn, it seems like you could come to a verdict for the top car.

Maybe there were Russian hackers involved with the ballots! Nah, they would probably have called it a tie between the Bentley and the Rolls. Instead, The Robb Report narrowed the field to just the Porsche and the Lambo.

“After a hard-fought battle between three top-ranking contenders, our judges turned in the final round of votes, which—for the first time in the history of this event—gave us two Car of the Year winners,” explained Robb Report editor in chief Brett Anderson.

“Given that roughly 150 judges participated, a tie is an extraordinarily unlikely outcome; but then, the vehicles in question are themselves extraordinary,” he said. Aston Martin’s amazing new DB11 finished a close third.

Here’s what we know: The Porsche 911 has been painstakingly refined continuously since its 1964 Frankfurt Motor Show debut to achieve today’s $189,150, 580-horsepower twin-turbocharged 3.8-liter state of flat-six perfection.

And the Lamborghini Huracan Spyder LP 610-4 is a truly exotic 610-horsepower, all-wheel drive thrill machine that even has a power-folding soft top that you can raise or lower while driving at speeds up to 30 mph. We loved it in our Miami beach drive review.

See the complete results for your self on Robb Report’s site. And keep an eye out for any Russian hackers near the NCAA basketball championship game attempting to rig a tie.