Lambo’s “entry-level” mid-engine supercar does 0-60 in 3.1 seconds, boasts a top speed of 202-mph and turns heads everywhere it goes. 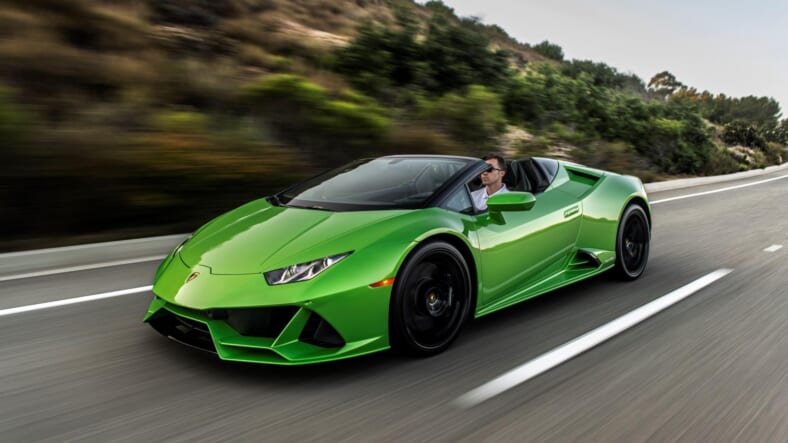 This past February we unleashed the Lamborghini EVO Coupe — what you might call the Huracán 2.0 — on the flawless black asphalt of the Bahrain International Circuit.

Not only was Maxim among the first outlets to cover Lambo’s most important new supercar (the Urus SUV notwithstanding), but we also had the rare gift of whipping the newest Raging Bull at twilight on the official Grand Prix circuit.

The scene was surreal: listening to the EVO’s naturally aspirated V10 howl in the gloaming, tires screeching to keep hold on the track, as a ginormous desert moon hung above us, orange and wicked and wild.

This time, for the droptop version of its “entry-level” mid-engine supercar, Lamborghini settled on the tony shores of Laguna Beach, California. No F1-sanctioned racetrack in site, no glorious Super Blood Wolf Bahraini Moon hanging like stadium lighting in the sky.

Instead we follow a parade of EVO Spyders as they climb the Ortega Highway, cutting along the twisties of the canyon road with video game precision. Driving in the perfect caboose position, we watch mesmerized as the geometric wedges, low and wide, hug the ground, obscenely fat Pirelli P Zeros glued to the asphalt.

Roaring in unison, a chorus of blurts and barks and firecracker overruns cascade down the undeveloped valley, currently dry and brown and threatening to combust in the hail of V10 machine-gunning.

As any cultured supercar driver knows, the best part of a droptop is the sound. And one of the best parts of owning a Lambo is its naturally aspirated bellow (either V10 or V12 version). Combine them and you create a peerless timbre elevated in volume to ossicle-pulverizing decibels.

Even if you close the roof, Lamborghini designers were kind enough to engineer a tiny window in the fabric you can roll down to create a clean passageway — deleting any material between your ear holes and that glorious unboosted baritone wail. It was so loud, honestly, that we had to pop our ears several times in the two days of driving.

Structure wise, the EVO Spyder is almost exactly like its hardtop brethren: it comes stuffed with the Performante’s naturally-aspirated 5.2-liter V10, upgraded from the first-gen Huracán with titanium intake valves and improved exhaust system (good for 640 hp, 442 lb. ft. (600 Nm) of torque, a 0-60 mph clip of 3.1 seconds and a top speed of 202-mph).

The EVO Spyder also comes loaded with all the next-level systems that make the EVO Coupe one of the most advanced supercars on the market: Rear-axle steering added to the already highly reactive Lamborghini Dynamic Steering (LDS) system; upgraded MagneRide magnetorheological suspension; torque vectoring and an advanced traction control system to augment the Huracán’s already superb all-wheel drive (AWD) architecture.

Few AWD vehicles are as eager to drift as the EVO — in Sport or Corsa mode you can peel out at stop signs (of course I’d never suggest doing so).

But perhaps most gamechanging is what Sant’Agata engineers are dubbing LDVI (Lamborghini Dinamica Veicolo Integrata). Consider the LDVI the EVO’s brain. Debuting on the EVO Coupe, the LDVI takes in a torrent of data, processes it at supercomputer speeds, and every 20 milliseconds accordingly adjusts performance variables.

The LDVI not only reacts faster than any Lamborghini CPU ever has, but via external data, driver inputs and driving modes it can actually predict a driver’s needs, setting up the Spyder for whatever is around the corner. It is this holistic predictive quality that makes the EVO such a merciless nemesis to competitors like the McLaren 570S and 600LT  and Ferrari 488.

Other than the convertible button the Spyder’s interior is the same as the Coupe. The centerpiece being the EVO Coupe’s 8.4” HMI capacitive touchscreen with redesigned MMI. Consider this — along with Apple CarPlay and Android Auto — Lamborghini’s big push to attract a younger, more connected clientele.

You not only control all infotainment and nav from the large touchscreen, but it can also illustrate the LDVI’s calculations and power distribution.

Our tester was a canary yellow monster, the interior lined in matching banana peel Alcantara and bright lemon contrast stitching. Lambo’s signature hexagonal motif repeated throughout interior: in the vent and speaker grills, molded in 3D horizontally across the dash. Of course there’s Lambo’s playful ICBM launch Starter button and metal aviation switches across top of the central console.

Exterior highlights include the EVO Coupe’s 20-inch diamond cut Aesir rims, strangely both beefy and precise, and its striking rear-end. Lamborghini Head Designer Mitja Borkert reshaped it for the Coupe placing its dual cannon exhaust ports high in the middle above the diffuser.

As an avid MotoGP lover, Borkert told us in Bahrain that his inspiration for the twin barrels came from the raised mufflers of racing bikes. Spyder exclusives include its electrohydraulic soft top which can be lowered in 17 seconds at speeds up to 30 mph, and a new four-layer glittering Hulk-green paint dubbed Verde Selvans.

The original Huracán was Lambo’s best-selling car ever, moving some 10,000 cars in its initial four years on the market. Sure the Urus will in all likelihood eclipse these numbers, but that does not diminish the importance of the V10 Huracán bloodline for the Italian brand.

Now that the Coupe and Spyder versions have hit showrooms, we’re guessing other models will be coming soon — including a rear-wheel-drive version, one enabled with the Performante’s groundbreaking ALA-wing, and even limited edition higher-performance models as well.