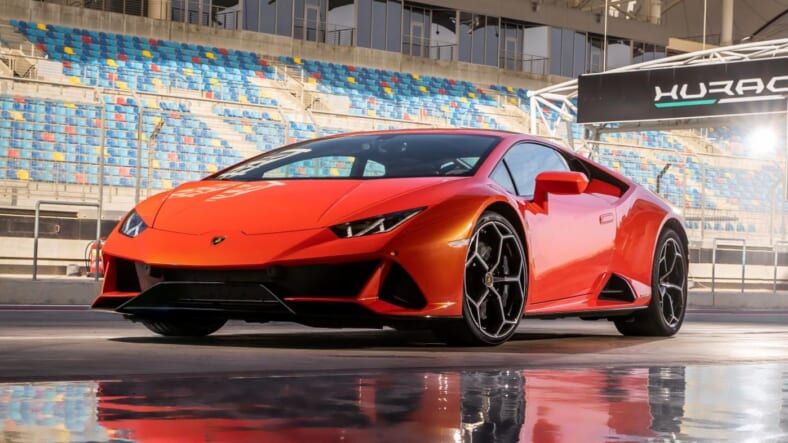 Someone at Lamborghini is a genius. OK, lots of people at Lamborghini are geniuses, obviously, but whoever thought to augment our afternoon sprints around the Bahrain International Circuit with a sunset run deserves a prized single malt.

This track is the same smooth, silky asphalt where every March the best motorsport drivers in the world descend to race the Bahrain Grand Prix — a Formula One-built coliseum with opposing load corners and three long straights that, in the rapture of a Lamborghini, allow one to reach ludicrous speeds.

Which we do. On straights the EVO is furious, running through the ‎7-speed dual-clutch transmission in lightning blinks as we eclipse 170 mph all too easily. But while the noon drives were thrilling, this twilight run transcends into something unforgettable: turning a long corner, we suddenly came face-to-face with a giant moon hanging in the night sky like a party-sized pepperoni pizza — its face mozzarella yellow, mottled with dark red splotches.

Across the planet on that same night in Los Angeles, the city was staring up at the famous Super Blood Wolf Moon. I’d felt guilty I was missing that celestial gift, but once I saw the gargantuan Bahraini moon glowing like the world’s biggest spotlight all disappointment washed away.

It illuminated the track like stadium lighting as giant, hale-sized clumps of burned rubber bumped off the road and off my windshield. Pirelli P Zeros howled on the smooth asphalt, the V10 wailing as we held the steering wheel white-knuckled. Earlier in the day the sound had a more traditional hooligan joy to it. But now, with that big orange moon hanging over the horizon, lonely and stupid, the howls took on a much more lupine American Werewolf In Bahrain vibe. The EVO felt wilder in the darkness, more feral and unleashed.

What a way to first experience the mid-engine EVO supercar, what you might consider the Huracán 2.0. No it’s not a second gen car exactly, but loaded with the Huracán Performante’s engine — the original Huracán’s naturally-aspirated 5.2-liter V10 upgraded with titanium intake valves and a refined exhaust system — the EVO will become the standard Huracán as Lamborghini phases out all previous models.

You can still order the Spyder and Performante models of the original Huracán, but soon the EVO will start everything fresh again for their V10 bloodline. As Lamborghini did with the OG Huracán Coupe, you can expect a rear-wheel drive, Spyder, and then high-po versions cycling into showrooms in the coming years.

It’s not just the Performante’s engine — generating a stomach-churning 640 hp and 442 lb. ft. (600 Nm) of torque — that the EVO gets bequeathed from its predecessor. The EVO will also come loaded standard with all the top dynamic systems you previously had to shell out extra dough for:

1. The central gravity system for the Huracán, dubbed the Lamborghini Piattaforma Inerziale (LPI), is now enhanced to LPI 2.0. Utilizing a robust array of accelerators, gyroscopes and sensors to continuously calculate the Huracán’s roll, pitch and yaw, the EVO can better assess its lateral, longitudinal and vertical accelerations and feed this info to an all new system dubbed the LDVI (more on this in a bit).

2. Rear-axle steering is now added to the already impressive Lamborghini Dynamic Steering (LDS) system for even quicker steering reactions. Not only does rear-axle steering add agility in sharp corners by virtually decreasing the supercar’s wheelbase, but it also improves stability at high speed movements by virtually lengthening its wheelbase (the rear wheels move in opposite direction to the front at low speeds for better turning radius, and move in parallel direction at high velocity).

3. A new advanced traction control system is improved via all-wheel drive (AWD) architecture, torque vectoring and upgraded MagneRide magnetorheological suspension. Get power to the wheels that need it most, with better dampers to withstand the pressure.

And for the first time ever in a Lamborghini, all these complex systems are governed by a singular system: the aforementioned LDVI (Lamborghini Dinamica Veicolo Integrata).

The LDVI is the EVO’s brain, ingesting a torrent of data, processing it at supercomputer speeds, adjusting and accordingly executing performance variables every 20 milliseconds. In totality the LDVI not only reacts faster than any Lamborghini CPU ever has, but it can — via external data, driver inputs and driving modes — actually predict needs, setting up the EVO for whatever it’s about to encounter.

From the seat-of-your-pants perspective, the EVO’s improved agility is the most notable quantum leap over the previous Huracán. Lamborghini academically highlighted this quantum leap in agility via slalom and Figure 8 courses set up in the parking lot of the BIC.

Here we were able to drive an EVO immediately after a Huracán Coupe, and the former’s ability to cut into turns — both the sharp slalom variety and sweeping 8’s — was notable. If there was any dings on reviews of the original Huracán it was the supercar’s tendency to understeer in heavy corners; consider that blemish totally erased.

The EVO’s agility was even more pronounced on the crucible of the racetrack. It shined brightest in corners, ducking and weaving on S curves like a prize fighter. The combination of these systems — the rear-wheel steering and torque vectoring for cutting, the traction control and AWD for stability even in the harshest G forces — was electrifying.

That “Superman Effect” you hear with modern supercars is becoming so prevalent it takes at least a half-dozen laps before you grow the courage to even begin poking at the EVO’s performance limits. It hits a corner with superlative balance and steadiness, and shoots out of the apex with surefooted thrust.

What’s more, in the central Sport mode — more dynamic than Strata (Street), more controlled than Corsa (Track) — the EVO is ridiculously easy to drift. In fact, it’s the friskiest all-wheel-drive vehicle we’ve ever driven. Normally with AWD unless you shut traction control completely off the car will quickly regain its footing should you get the ass swinging out. It’s programmed to do so.

Not in the EVO; because of its agility all it takes is a flick of the wrist in the corner to get the back out, and keeping it that way is smooth and predictable: push the throttle and the EVO continues howling its tires sideways, never overly eager to correct itself back into proper form. It is streamlined hooliganism.

The most dramatic visual evolution is its rear-end, reshaped by Lamborghini Head Designer Mitja Borkert. Reinvented via the placement of twin cannon exhaust ports that sit high in the middle above the diffuser, Borkert told us he took inspiration for the artillery-like barrels from MotoGP motorcycles’ raised mufflers. The effect is menacing.

The interior receives a more dramatic upgrade thanks to an utterly redesigned MMI. Sitting center of the cockpit-like cabin is a new 8.4” HMI capacitive touchscreen, placed vertically just above the Start button. This new MMI is not only figuratively centrally placed but also symbolically, as it is the focus of Lamborghini’s new drive to attract a younger clientele.

“We’re showing to the young generation that we need to be connected, even if you’re driving a super sports car,” Lamborghini CEO Stefano Domenicali told us. “That’s why it was so important to start Lamborghini’s connectivity program with this segment.”

Hence the touchscreen has an iPhone-like interface, with multi-finger gesture control and voice commands. It also features Apple CarPlay with smartphone integration for the first time, while also governing car functions like infotainment, seats and climate, and providing real-time status of the LDVI system.

TO BUY OR NOT TO BUY

The EVO resets the table for Lamborghini’s “entry-level” supercar, and creates a brilliant canvas for Sant’Agata engineers to start the next cycle of Huracán products. The mind reels at the performance potential of the Huracán 2.0 if (or more likely when) they decide to augment the EVO with the Performante’s ALA active aero rear wing.

Nürburgring records should topple like games of drunken Jenga.