A $400,000 Lamborghini Huracan Performante Was Fried to a Crisp at a Missouri Gas Station

Viral video shows how the supercar met its fiery demise. 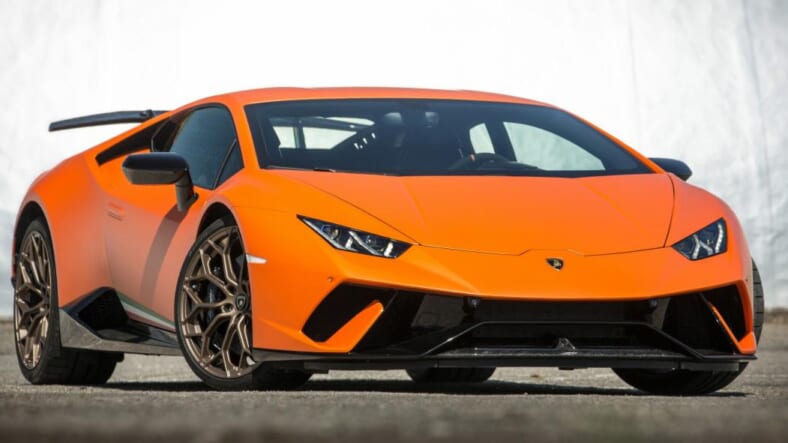 The Raging Bull is no match for a gasoline-fueled fire.

Viral photos and video show the unfortunate chain of events that left a $400,000 Lamborghini Huracan Performante fried to totality at a Missouri gas station.

In a Facebook post, exotic car dealer Parker Gelber explained that he and a fellow Lambo owner were out on an evening drive when they stopped to refuel.

“Yes, that was my friend and I at the gas station last night. We were out driving for a bit and I needed to go get gas. The blue Lamborghini pulled up right behind me (red performante),” Gelber wrote.

“He decided to go in to get us waters and while I was trying to pay for my gas at the pump there was a card error, so I also went inside.”

Meanwhile, a bystander who was rightfully wowed by the pair of powerful automobiles inadvertently captured the moment a minivan driver drove off with the gas hose still attached to the vehicle. When the hose broke, the pump sprayed fuel into the blue Huracan’s piping-hot engine bay.

“As soon as we walked in, we saw a massive fireball out the window. We all ran out of the gas station to the other side of the road,” Gelber wrote.

“At this point, we had no idea what happened or who’s car(s) were on fire. We dialed 911 and when the fire was out you could see that his car was completely burned down, our red one just covered in ash.”

Eye-popping pictures of the blazing scene have created a stir on social media.

Reading the words "Lamborghini on fire" makes my heart hurt.

And the car isn't even mine.

If youtube has taught me anything, its always have a fire extinguisher handy when riding in a Lamborghini. They seem to always be on 🔥🔥😧😧😭😭

Gelber added that the clueless motorist who caused the fire was quickly located by police. Fortunately, the Italian-made supercar was the only casualty.

It’s not the only totaled Lambo to make headlines this week. CBS Chicago reports that another Huracan met its demise when its driver crashed into a parked Honda Civic.

Hopefully everybody involved in these freak accidents has insurance.