Pope Francis Just Got a Brand New Lamborghini Huracan, Which Sure Beats the Popemobile

It’ll blow his beanie off. 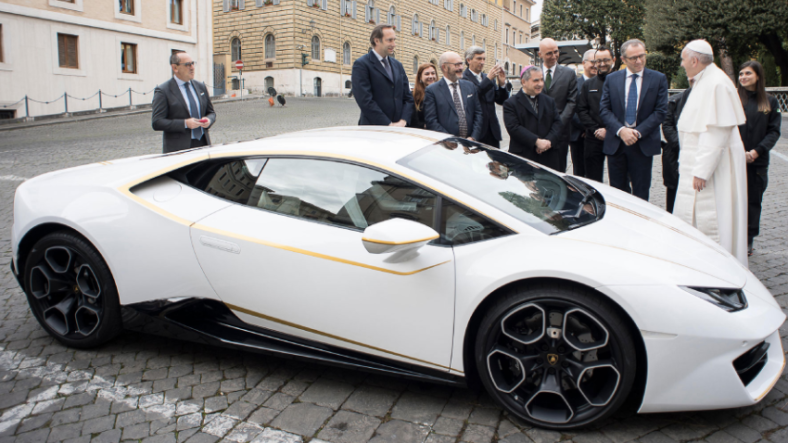 Pope Francis is a humble man of modest means. His tenure as the leader of the Catholic church has so far been marked by a tendency to be frugal with the church’s money and scale back on the luxuries enjoyed by previous popes.

That includes the vehicles he’s used in the past, everyday Fiats and Fords only slightly modified for security’s sake.

Recently Lamborghini briefly gave the papal fleet of vehicles an awe-inspiring upgrade in the form of a $225,000 Huracan.

Lambo CEO Stefano Domenicali presented the Pope with the vehicle in a special ceremony held outside the Vatican, accompaned by members of the Lamborghini board as well as a couple of vehicle technicians.

But again—Pope Francis really isn’t a Lamborghini guy. He’s more at home in a Ford Focus. So this Lamborghini will go to charity, according to the luxury car maker’s press release:

The car will be auctioned by RM Sotheby’s on 12 May 2018, with the proceeds delivered directly to the Holy Father, who decided to allocate them to the Pontifical Foundation “Aiuto alla Chiesa che Soffre” (Aid to the Church in Need), the Pope John XXIII Community, GICAM headed by Dr. Marco Lanzetta (hand surgeon) and “Amici per il Centrafrica” (Friends of Central Africa).

That means someone else will have a chance to purchase a Pope Francis-autographed Lamborghini Huracan in May of next year.